Canalys: Samsung leader, the fall of Xiaomi and the rise of Realme

Xiaomi smartphones are losing popularity, while Realme is gaining momentum

According to the analytical company Canalys, Samsung continues to maintain its leadership position in the European smartphone market in the first quarter of this year. They calculated that a third of all delivered smartphones carried the logo of the South Korean giant and the company controls 35% of the mobile device market.

At the same time, experts note that in the first three months of this year, the supply of smartphones to the European market sank by 10% compared to the same period last year. In quantitative terms, this is 41.7 million shipped mobile phones against 46.4 million a year earlier. 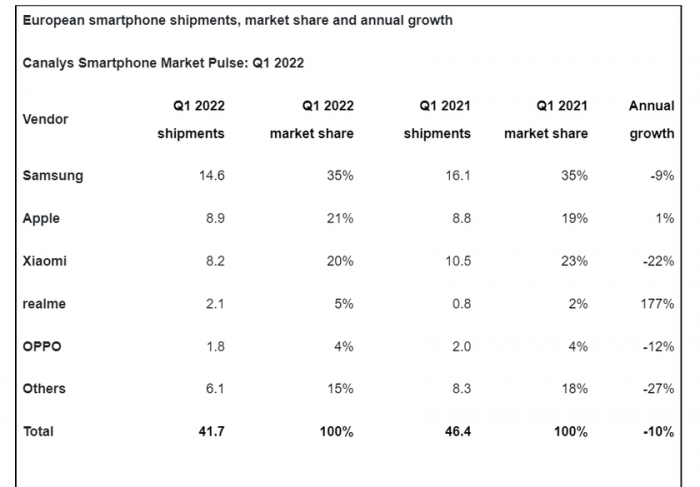 In second place was Apple, with a 21% share and 8.9 million delivered iPhones. The third was Xiaomi, whose devices accounted for 20% of all shipped smartphones. Alas, the first quarter was not the most successful for the company, and it rolled back, losing 3% of its market share.

Realme, on the other hand, was able to significantly increase the supply of its devices, and the growth was 177% compared to the first quarter of last year. Now the company controls 5% of the market share and the number of shipped smartphones was 2.1 million against 0.8 million a year earlier. Closed the top five Oppo with a share of 4%.