What is LTE + for and what is the difference from LTE

The 4G network provides high-speed Internet, thanks to which you can watch various videos and broadcasts in high quality, open resource-intensive web pages, and quickly download bulk materials. But there is also the 4G + standard, which is able to give out the Internet at even higher speeds. The technology is called LTE-Advanced. How it works, why it is needed and which smartphones support this communication standard - we will tell in today's article.

What is LTE-Advanced (4G+) and how it works

LTE-Advanced is also called 4G+, LTE+, LTE-A, Carrier Aggregation or carrier frequency aggregation. All these names refer to the same technology. LTE-Advanced is a mobile wireless standard that is an improved version of the standard 4G network.

LTE-A works as follows: several bands (carrier frequencies) are combined, which increases the speed of the mobile Internet. We talked more about frequency ranges in this article . Each operator provides the Internet on their channels with a certain range. These channels can be overloaded, due to which the Internet speed will drop. Carrier aggregation solves this problem by aggregating multiple bands, also called a band. It is up to the operator to decide which bands to combine. The most common aggregation is B7 + B7, B3 + B7, B3 + B38 or even B3 + B7 + B38 and B3 + B7 + B7. In theory, it is possible to combine up to five bands, but most often two or three bands are aggregated.

For example, a 4G network on one channel provides speeds up to 150 Mbps. But using LTE Advanced, you can achieve speeds of up to 300 Mbps or more, that is, the Internet will be twice as fast. Some flagships generally support speeds up to 2 Gb / s. 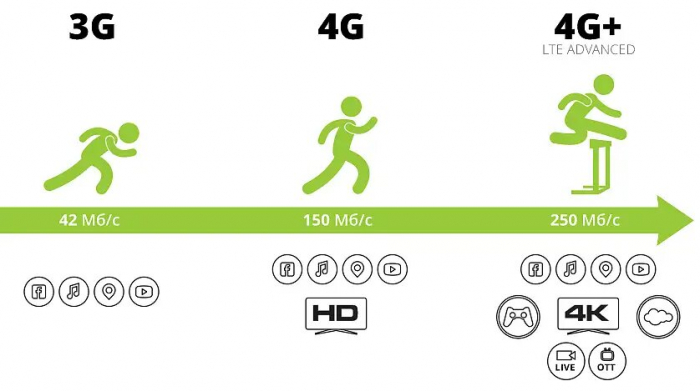 Note! Frequency aggregation is not available in every city. It is usually used in densely populated cities where the main channels are overloaded. Therefore, the main requirement for the operation of LTE-Advanced is adequate coverage. In Russia, the aggregation of carrier frequencies is in the main Russian operators - MTS, Beeline, MegaFon, Tele2, Yota. In Ukraine, 4G+ is provided by Kyivstar, Vodafone and lifecell. To find out if aggregation is supported specifically in your area, you need to contact the operator yourself and clarify this issue.

Pros and cons of using LTE-A

The main advantage of Carrier Aggregation is the increased speed of the Internet. As noted above, the difference with a conventional 4G network is quite large. If the speed of 4G is about 100-150 Mbps, then using LTE-A, the figure reaches 300 Mbps. This means that you will be able to consume content with greater comfort. Of course, strictly 300 Mbps speed is not guaranteed - it all depends on the specific operator and location, as well as on the smartphone model. But in any case, the Internet will work faster. 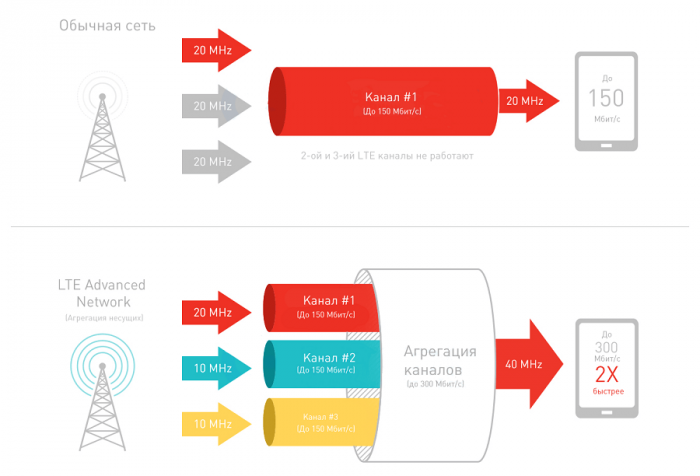 The disadvantage, oddly enough, is also available. And this is a quick discharge of the battery, since the mobile device connects to several bands at once. The phone will drain about 10-15% faster than when using 4G or 3G.

How to know if your smartphone supports frequency aggregation

Not all phones can connect to multiple channels at once. For this, there must be a Cat.6 or higher communication module. But this value is not always indicated in the characteristics of a smartphone, so it’s enough just to see if there is an LTE-A designation there. To do this, open the official website of the manufacturer, a page in an online store, a thematic forum (for example, w3bsit3-dns.com) or any reliable site. Personally, it is convenient for me to look at all the characteristics of smartphones on the Gsmarena website. It is in English, but you can use an online translator. The site contains the exact technical parameters of phones from almost all manufacturers.

1. We go to the site and select the manufacturer from the block in the left corner of the page, or simply enter the name of the model in the search box.
2. Open the "Technology" tab and check the "Speed" line. It should say "LTE-A". If there is such a mark, then carrier frequency aggregation is possible on this model. But again, provided that the operator provides this service in your area.

Most manufacturers do not add the ability to turn LTE-A on and off on their own in mobile devices. The smartphone simply automatically connects to several frequencies, if such an opportunity is provided by the operator. You can find out about the current aggregation by the 4G+ or LTE-A icon in the status bar. 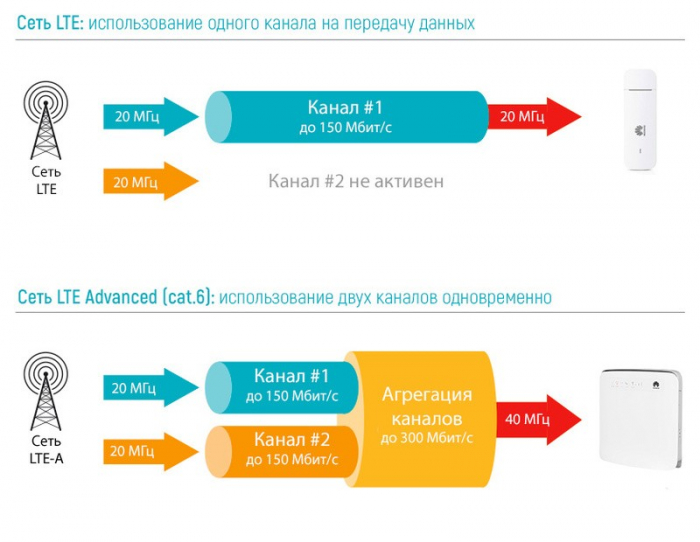 But, for example, on Honor or Huawei phones, aggregation can be enabled manually. To do this, open "Settings" - "Mobile network" and move the slider opposite "Frequency aggregation". If all the conditions for combining channels are met, then the phone will immediately connect to several bands.

LTE-Advanced is a very useful technology that will increase the speed of your internet. Since 5G is not yet available in our countries, and 4G speeds are already not enough for some scenarios, 4G+ becomes a great solution. After all, few users will refuse high-speed Internet. Yes, the phone's battery will drain faster, but you can turn a blind eye to this shortcoming, given the good capacity of modern smartphones. Write in the comments if you knew about carrier frequency aggregation before and whether you use it.