Megapixel madness: Samsung demonstrates the capabilities of a 200MP sensor

Created a photo larger than a basketball court

Samsung is the company that believes that there are no many megapixels. It was she who first released the Samsung HP1 sensor with a resolution of 200 megapixels and this happened in September last year. Until today, there are no smartphones with a 200 megapixel camera on the market, but this oversight will be eliminated in July. Motorola will be the first to release a smartphone with a record-breaking sensor. To convey to the potential audience that 200 megapixels is a boon, Samsung has published a promotional video. We were shown the process of creating a huge canvas 28 meters wide and 22 meters high. This area is one and a half times the area of a basketball court.

To create a record photo, a board was taken, where a 200 megapixel sensor, an external display and a professional photo lens were built in. A cat was chosen as the subject of photography. A series of shots were taken using various settings. Then 12 separate fragments with an area of 616 m² were printed, which were “sewn” together into one large canvas and hung on the facade of a high-rise building. 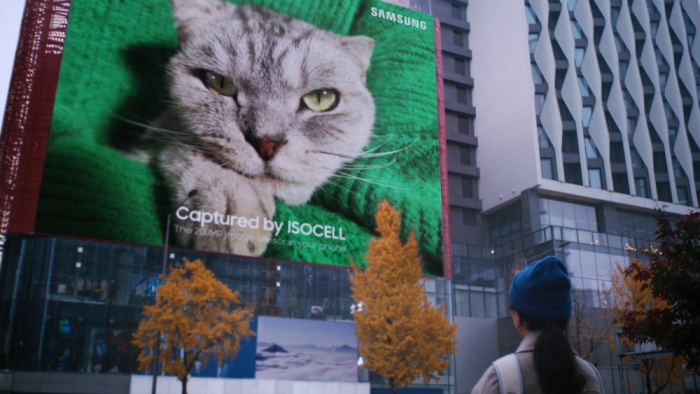 Samsung stressed that the benefit of 200MP is that users can take pictures that can be enlarged or cropped without sacrificing image quality. She believes that 200 megapixel sensors will soon become the standard for creating 8K video.

Recall that the Samsung HP1 sensor is based on ChameleonCel technology, which allows you to group four or 16 neighboring pixels into one large one. This transformation allows you to create images with a resolution of 50 megapixels or 12.5 megapixels, where the size of each pixel is 1.28 microns or 2.56 microns, respectively.