Asus Zenfone 8 review - not everything is so smooth...

Asus Zenfone 8 - it has something to show 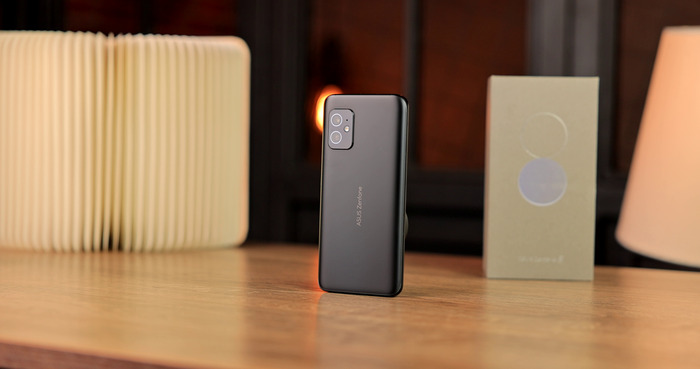 Interesting, fresh, unusual... This is how you can briefly describe the new product from Asus - Zenfone 8 . Surely many already want something new, except for products from Xiaomi , BBK holding and Samsung. Huawei and Honor have lagged behind our market; LG died during their lifetime, releasing some kind of game. Google remains with its Pixel and Apple , but this is a slightly different topic.

And now Asus brings a breath of fresh air. Their new product does not look like a wow product, as Chinese manufacturers usually like to do.   Some of it will seem fresh, and some a little outdated. Of course, there are things that cause doubts (where without them). Therefore, carefully read all the nuances in our review. 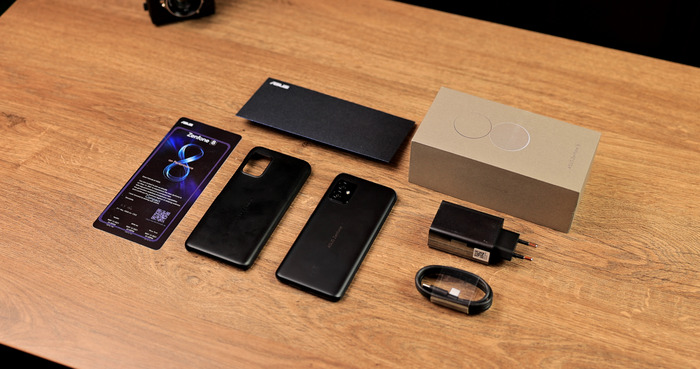 So, inside the gray box, the smartphone itself, a black 30W charger and a black USB type-C cable, as well as a black TPU case are waiting for us. The kit also comes with a film on the screen (not black), which needs to be glued. Adherents of the Redmi brand have probably already forgotten how this is done. Is it worth mentioning the presence of a user manual and a needle for a SIM card slot? The case itself has a pleasant texture, because of which the phone “sits” well in the hands and will not quickly get dirty.

A bun with raisins 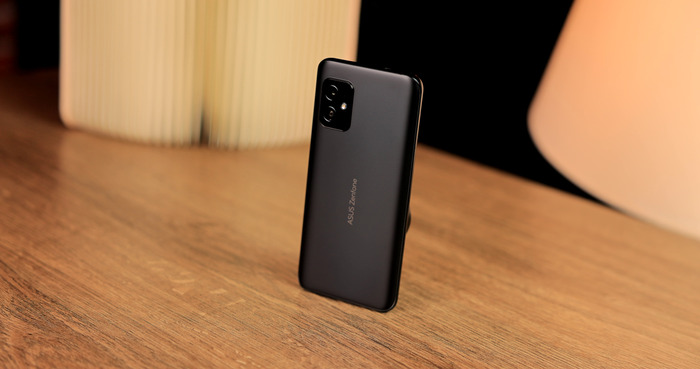 Without a case, the smartphone looks relatively restrained and even rustic, and in this it differs little from the gray mass. He doesn't yell , "Look, I have the biggest camera" or "I have Harman Kardon stamped on my butt bottom." Everything here is without unnecessary pathos and any sparkles. The feeling that the manufacturer wanted to say: "You do not look at the appearance and inscriptions, but hold it in your hands, use it ..."

The back panel is made of frosted glass, which in turn is good - there will be no fingerprints on the case. The block of cameras, of which there are only 2, has already become boring to us after Samsung A51 . One gets the impression that the design of this model was developed a long time ago, and released only now. 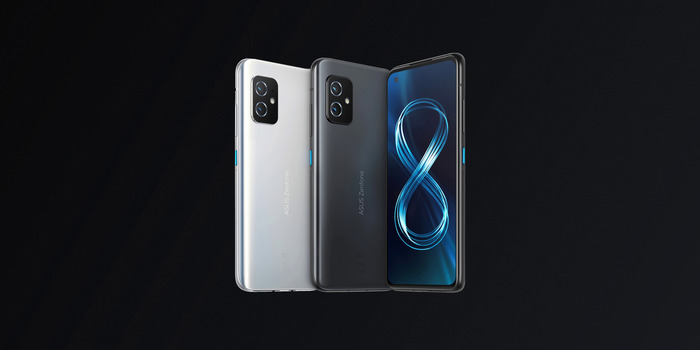 The back panel is offered in 2 variations: silver and black (the Asus website also lists white, but it is not yet available). It has rounded edges. The inscription Asus Zenfone is visible in the middle of the back cover. Number 8 is nowhere to be found. What makes the smartphone stand out at first sight is the blue power button on the right side. At least something should make it stand out. The frame itself is made of aluminum, not "deshman" after all. What is even more unusual: the model has wide openings on the front panel above and below the display: on top - for the speaker, and on the bottom - for the main microphone. 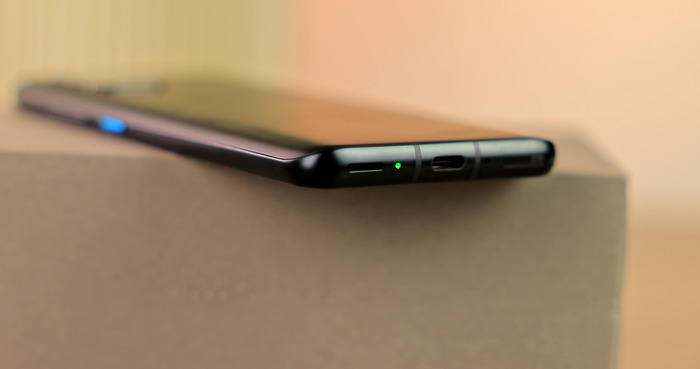 A notification indicator was unexpectedly placed at the bottom end. A slightly controversial decision: on the one hand, it is convenient when the smartphone is “face down”, but on the other hand, if it lies with the wrong end facing you, then you will not see it. Also located at the bottom is a slot for SIM cards and a hole for the speaker. 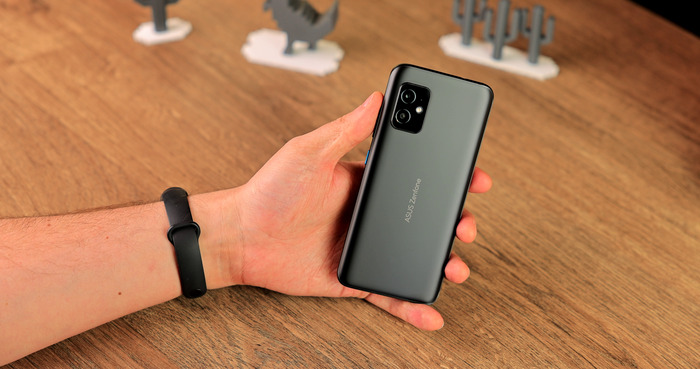 What the user will immediately notice when picking up this smartphone is its dimensions. The Zenfone 8 is quite compact at 148mm in height and 65.8mm in width. But he cannot boast of subtlety, the thickness of the case is almost 9mm. Separately, we can note the flagship protection against water according to the IP68 class (not all flagships from the Chinese have it). 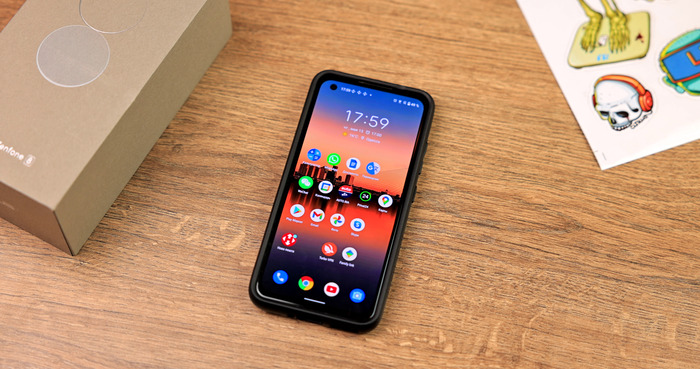 The "face" of Asus Zenfone 8 is reliably protected - the display works under the cover of Gorilla Glass Victus , although it does not hurt to stick a protective film from the kit. The bezels around the display are wide by modern standards, especially at the top and bottom. The front camera is embedded in the display, you will see a hole for it in the upper left corner.

Now let's move on to the display options. Although in general, the characteristics of the Zenfone 8 are no longer surprising, but they are actually top-end. Samsung 's excellent AMOLED matrix is installed here, the colors are clearly calibrated. Where already now without a 120Hz update? Everything is there, please choose: 60Hz, 90Hz, 120Hz or an adaptive frequency that changes depending on the use case (but with the latter option, you will have to trust the manufacturer in which case which frequency you need). 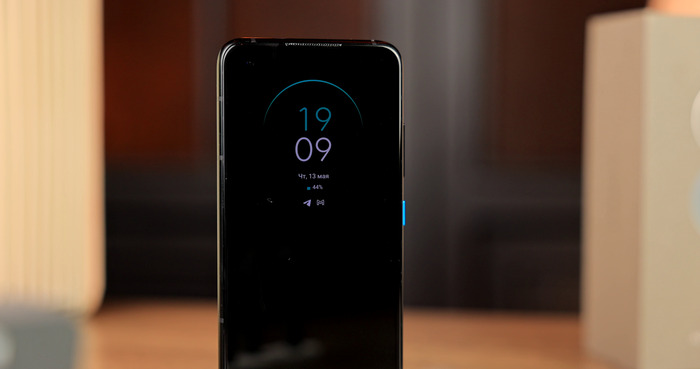 Everything that can be used in the case of an AMOLED screen is applied here: a full-fledged Always on Display and DC Dimming. Enjoy.

The fingerprint scanner under the display works fine and, admittedly, the manufacturer did not make a mistake with its placement, it will be easy to get into it. Occasionally it was noticed that it did not work, but the smartphone does not give any signal in such a situation. 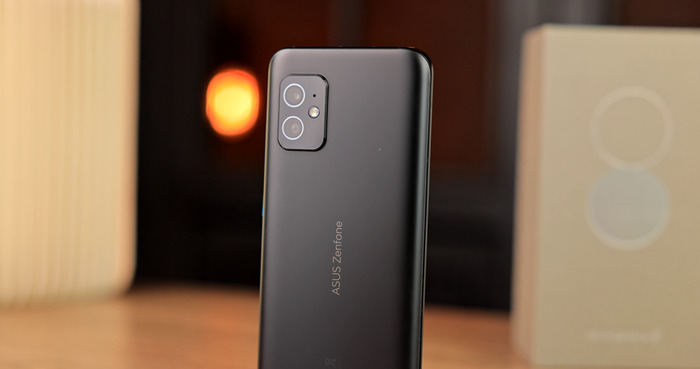 We have already discussed the appearance of the camera block, let's see how well these "eyes see". The main module is a 64-megapixel sensor from Sony with optical stabilization. An additional module is a 12MP camera with an ultra-wide-angle lens. 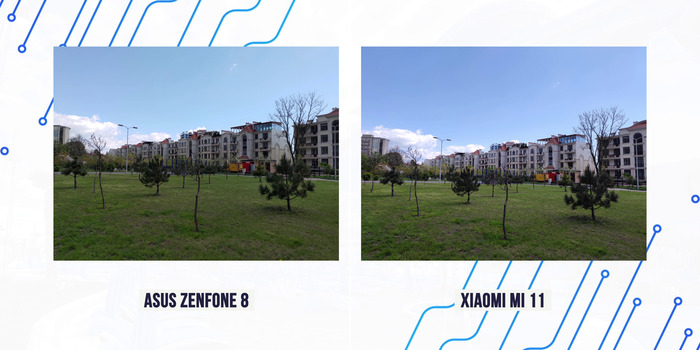 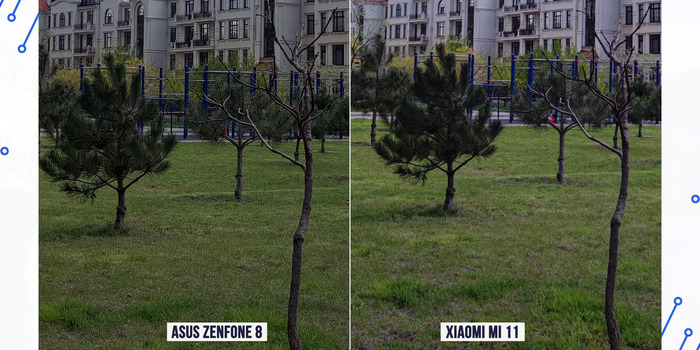 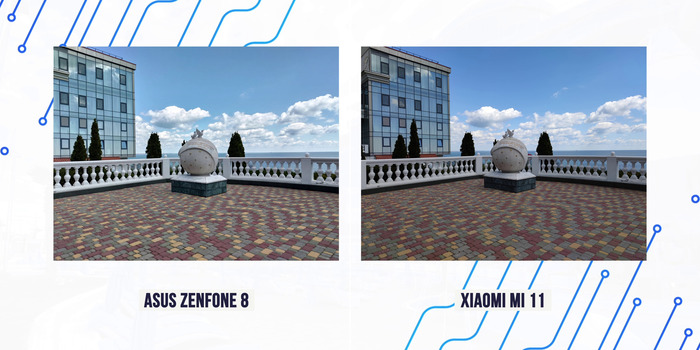 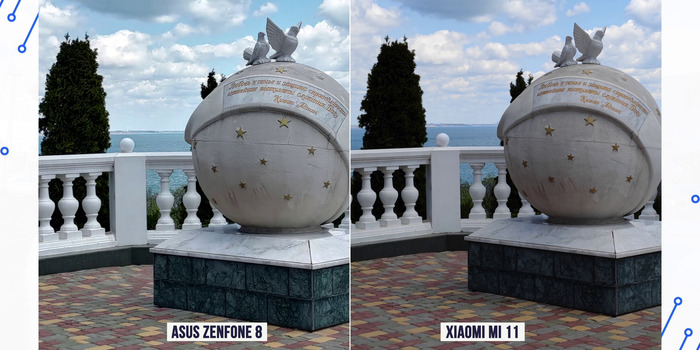 It does not give out anything unusual, the smartphone shoots at the level of flagships, for example, Xiaomi Mi 11. Comparison with it will be very appropriate. During the day, Aisus' pictures are quite contrasting with good detail, although Xiaomi is a little ahead in this regard. As for the dark areas, then on the contrary, Aisus has a better result. 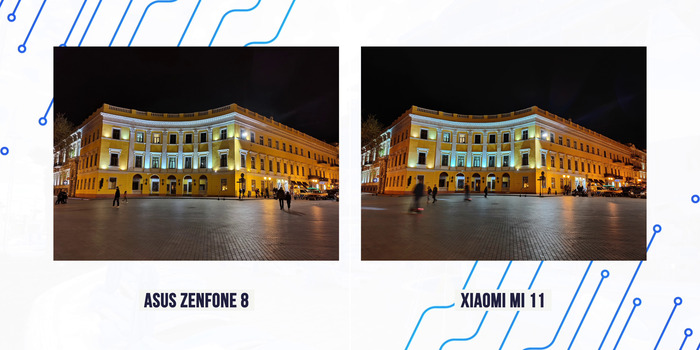 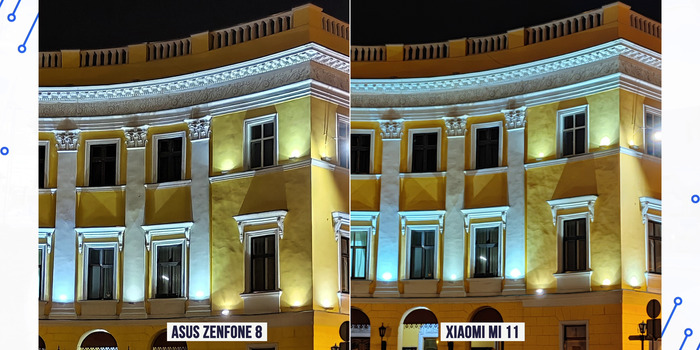 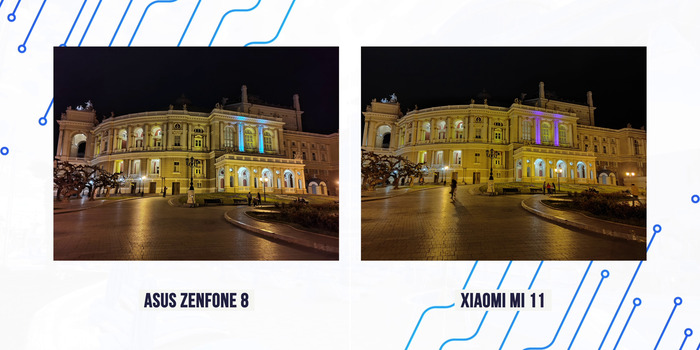 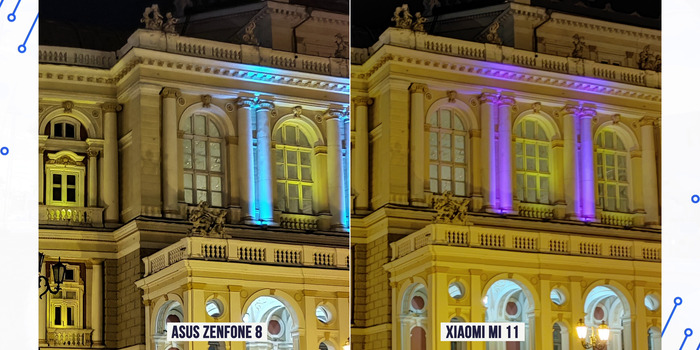 At night, photographs are of approximately the same quality as Xiaomi, the difference is only in color reproduction. Photos come out colder on Asus.

Video Zenfon 8 can shoot on the main module in 8K resolution, and on the front camera - in 4K! Optical stabilization works when shooting in 4K on the main camera. There are no complaints about autofocus during recording. There is an Acoustic Focus Mode for selecting the direction of sound recording and a triple microphone. 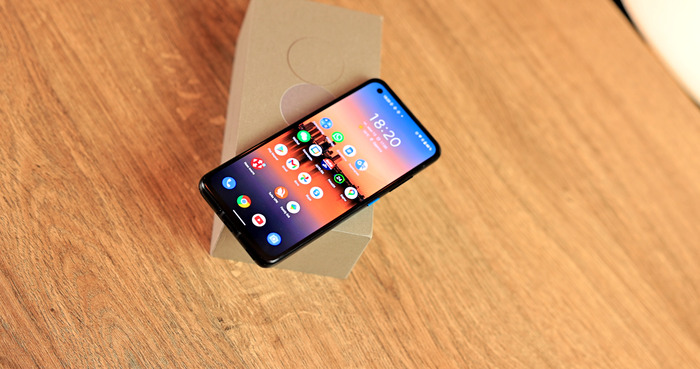 Two speakers are responsible for the sound, and they sound damn good. And of course, a few words about the vibration motor - its work is generally pleasant, but in some cases it seems that it is not so top-notch. 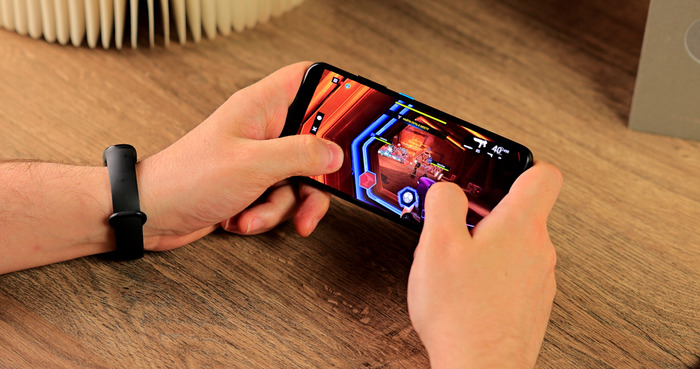 We already know what Qualcomm 's top 888 dragon is capable of, since it is he who is responsible for the operation of the smartphone. This is a frenzied machine gun that you still need to be able to curb, otherwise it will burn your fingers.

So, something is wrong here. Most likely, the manufacturer did not manage to carefully work out the cooling and under high load the case heats up noticeably. At the peak, the device showed 50ºС. But that's not all. The saddest thing is that at this temperature you will see a significant drop in performance due to throttling! In demanding games like ShadowGun Legends or Genshin Impact , you will get an average of 44 fps at maximum graphics settings. Of course, the level is higher than that of mid-budget smartphones, but a modern flagship, and even on such a horse, should be a little ashamed of the performance. 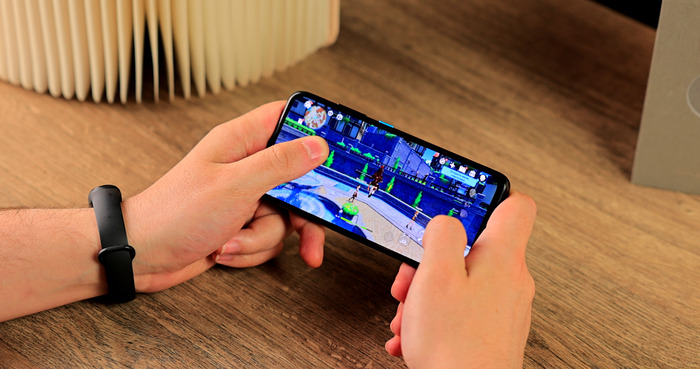 But here another question is also important: who will play these games with such a diagonal of the display? This is a compact, and those who buy it will most likely do it for other purposes. Such dimensions are pleasant to use in everyday tasks: making calls, chatting in instant messengers, scrolling the news feed ... But even in normal scenarios, the smartphone will heat up to a warm state. In short, it is not clear why Snapdragon 888 was installed in such a compact. Its price would be an order of magnitude lower with a simpler chip. 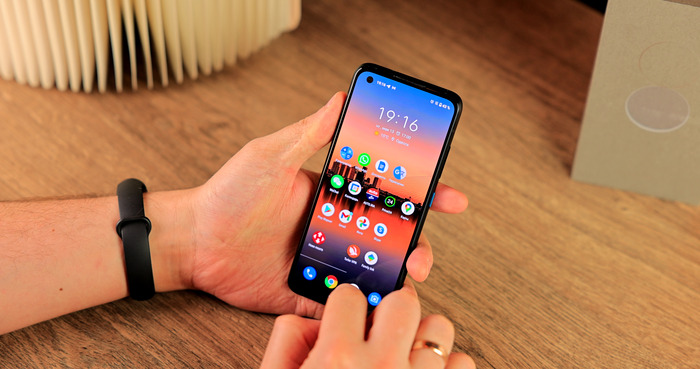 Let's start with the sad stuff. Our stallion lives for a very short time. In our proprietary autonomy test, he took an “honorable” 132nd place, lasting just over 6 hours. Yes, the battery is small here, only 4000 mAh, but a mega-gluttonous processor and an increased screen refresh rate. Everything is logical. We can see that the iPhone 12 mini “live” for about the same time, and the iPhone SE 2020 is generally an insect compared to them. Do not be lazy and look at the autonomy rating on the right. 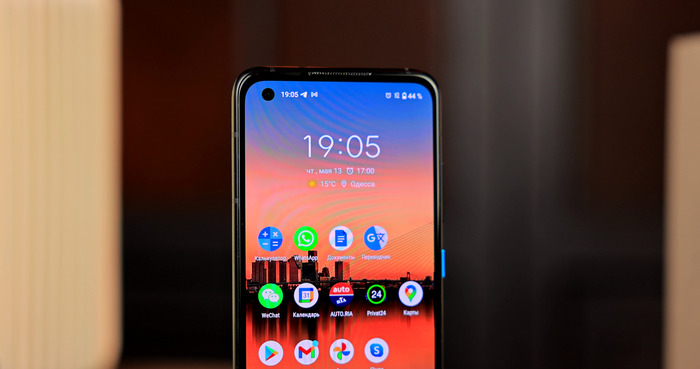 The ZenUi interface can be praised for its smoothness and stability - there were no comments during testing. A nice bun will be the ability to record calls in a regular dialer. There are many settings, especially in terms of screen, sound, etc. The power button has enhanced functionality: a double-tap opens the Google Assistant, and a short press opens the camera app. The camera application itself is implemented in its own way in the corporate style of Asus, but this is not for everyone. 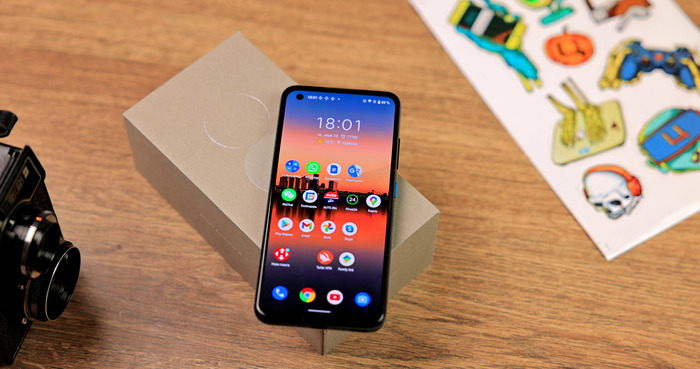 The company has set the price for its offspring is not the worst, the price starts from 600 Euros. For the 8/128 GB version, official retailers ask for 720 bucks, in Ukraine its price is 19999 UAH. And for the money it has its advantages :

The disadvantages are also in front of you:

Samsung's flagship Galaxy S21 will cost over $100 more. But you get wireless charging and a nicer design, as well as an extra telephoto lens. Its autonomy is also higher.

For the same surcharge, you can buy Xiaomi Mi 11. But in this case, you will find a slightly larger device (albeit thinner) with a better display, a larger battery and wireless charging. He also has a telephoto lens.

Asus Zenfone 8 Flip seems no less interesting with a rotating camera, a 5000 mAh battery and a telephoto. But its price tag for the 8/256 GB version starts at $970 - a rather intimidating jump.

All the best and may Android be with you!

POCO F4 5G and POCO X4 GT 5G: all about the middle peasants for the European market