Honor 10 review - Looks like a flagship, but there are nuances

Honor 10 - the flagship is not for everyone

Button below the display

Where to buy and how to save?

It's beautiful - that's what the first words of our Honor 10 review will be like. The device looks modern, stylish and expensive. The glass back panel shimmers in the sun with fancy stripes, but at the same time, the smartphone does not look like a cheap Chinese toy. A metal frame surrounds the body around the perimeter. The "unibrow" on the front panel is initially completely invisible, but we'll talk about it a little later. Ergonomics is generally pleasing: the smartphone fits perfectly in the hand, it is quite convenient to use it even with one hand, the assembly is of high quality, it feels monolithic. Much respect to the manufacturer.

It is worth noting that a test sample fell into our hands, but it is unlikely that it will differ much from what will go on sale. Be that as it may, catch the spoiler - the smartphone is good, but definitely not for everyone. 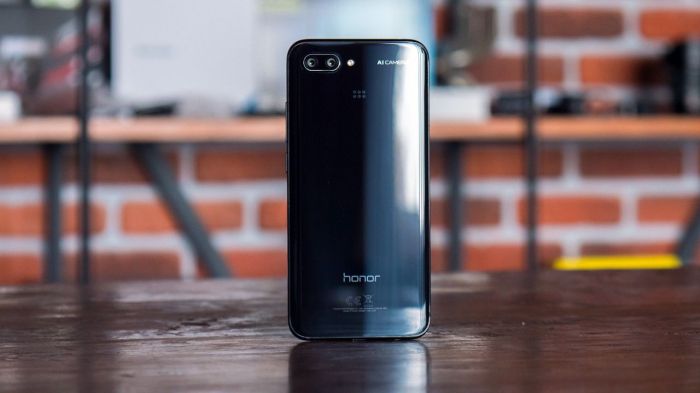 Button below the display

On the front panel, under the display, there is a touch button with an ultrasonic fingerprint scanner, bordered by some barely noticeable dotted line. To be honest, it upset me a little. We have seen advertising posters where this button is either not visible at all (just a dark section of the case), or vice versa - it is so clearly visible that it seems as if it is highlighted. I assumed that Huawei would do it smart: in normal use, the button would be invisible, and in those moments when you need to put your finger on the scanner, a special backlight would turn on. But the button is not hidden, and does not glow, but is simply outlined by an uncertain dotted line. I don't know why, I don't know why, but they did it. 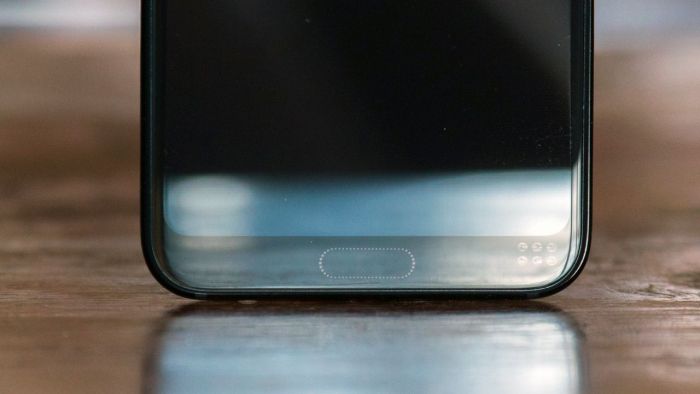 Honor 10 supports face unlock. It works not only by pressing the button, but also when you simply raise the smartphone with the display up. It is really very convenient, it works quickly and almost without errors, even in the dark. In those rare cases when face unlock for some reason did not work (rarely indeed), I used a fingerprint scanner. Despite the fact that it does not have a clear edging, the finger itself intuitively rests on it, so it is also very convenient to use it (at least for the owners of an average male hand). During the few days that I used this device, such an unlocking scenario has already become my habit, which now I really don’t want to give up. 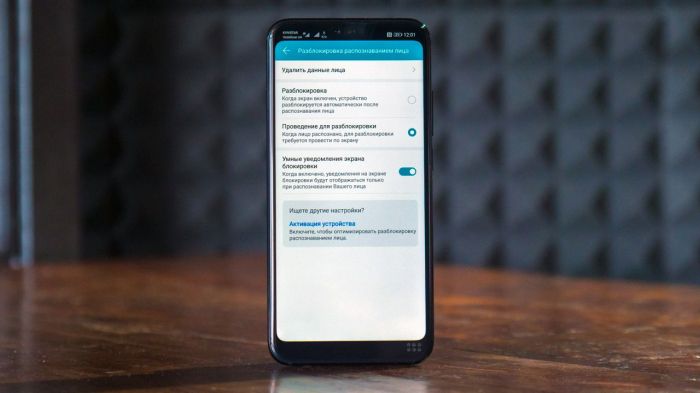 In just a few days of extremely careful use, the paint from the rim of the rear camera gradually began to rub off. I also draw your attention to the fact that the phone is quite slippery and almost completely covered with glass, so you need to use it very carefully. Sloppy people should think three times about how they are going to protect the original appearance of the smartphone. 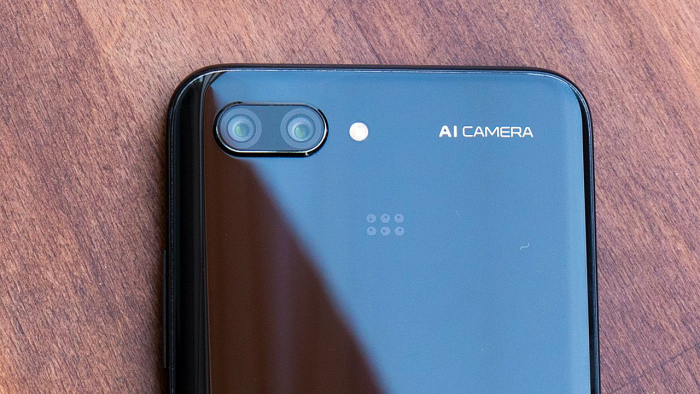 The smartphone received a 5.84-inch widescreen IPS display with an aspect ratio of 19:9 and a resolution of 2280x1080 pixels. The picture is simply gorgeous, clear, contrasting, “juicy”, “tasty”. The white color is really white and the black color is really dark like pitch. In the settings, you can adjust the color temperature, as well as switch between “natural” shades and more juicy ones (a la AMOLED). In general, the display tries very hard to look like OLED, but in fact it is not, and, in my subjective opinion, this is a big drawback. First, OLED is more energy efficient. Secondly, I would very much like “AlwaysOnDisplay”, but here it is not. And thirdly, if you want to hide a unibrow, then this may be a problem. In the settings, you can turn on filling the notification panel with black, and then most of the time (in normal lighting) the bangs will not be visible, but in good lighting, the borders of the cutout still become clearly visible. I know it's a matter of taste, but it's my job to warn you. 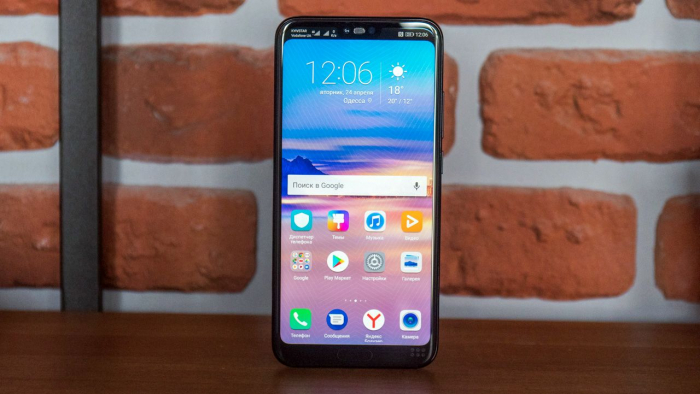 The smartphone has a built-in NFC module (hello Meizu!). But not everything is as good as we would like. For example, the Google Pay application is not supported here for some reason. Perhaps this is a limitation of my test sample, but it is unlikely. However, in the NFC settings, I selected the mobile application of my bank (Privat24) and everything worked. In addition to the usual contactless payment scenario, I also tried the “Huawei Beam” feature to quickly transfer files to another NFC-enabled smartphone. Yes, the technology is no longer new, and in general, few people will use it, but for general information: I succeeded. 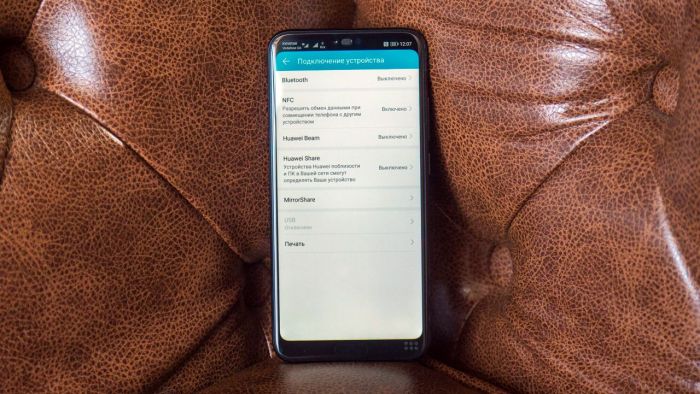 Honor 10 has one multimedia speaker located on the right side of the bottom edge. In this case, the spoken speaker does not help him in any way, and, in my opinion, this is a big drawback. The sound is generally pretty good, but to be honest, it could be better. In direct comparison with the OnePlus 3T, this smartphone “merged” with almost no fight. And also, in the process of using it, I constantly closed the speaker with my finger. I know that for many smartphones it is located in the same place, but this is more of a common drawback than an advantage. 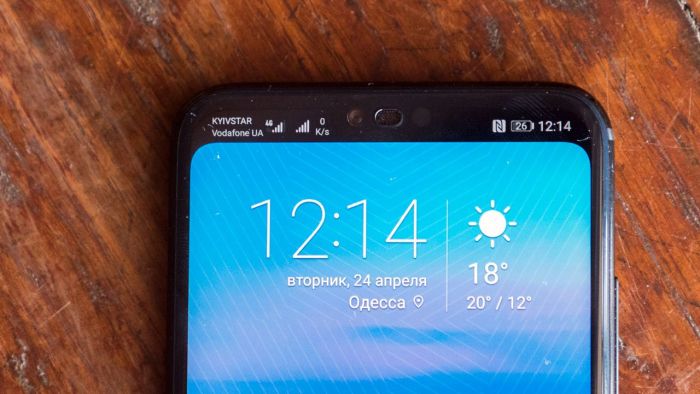 But in headphones, the sound turned out to be very good. All thanks to the dedicated Hi-Fi audio chip AK4376A. It's a pity, but there is no support for LDAC, but there is aptX. I missed the mids a little, but the presence of a manual equalizer leveled this shortcoming. In general, the sound in the headphones is in order. In addition, the smartphone has a 3.5 mm audio jack, which is another significant plus. 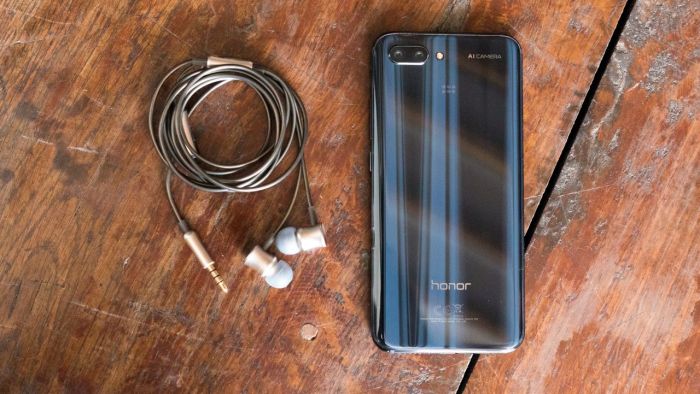 Under the hood is an octa-core Kirin 970 processor and 6 GB of RAM. RAM is enough with a margin. Applications never seem to be unloaded from memory at all. The processor is powerful, but it heats up like an iron. Especially the metal frame of the case. Prolonged gaming can turn into unpleasant sensations.

The processor load test for 5 minutes showed the following results:

the initial performance was around 123 GIPS, but after 15 seconds the processor began to heat up, due to which the performance dropped to the level of 90-100 GIPS. Toward the end of testing, another subsidence occurred to 55-65 GIPS, and the processor temperature reached 78 degrees, heating the metal edges of the smartphone so much that you definitely don’t want to use it. But, in fairness, it's worth noting that I'm talking about a synthetic test with a continuous constant maximum load on the processor, and in real life everything is not so bad. Let's put it this way: you can safely count on 15-20 minutes of comfortable gaming, but if you plan to play games all day long, then you should buy welding gloves along with your smartphone. 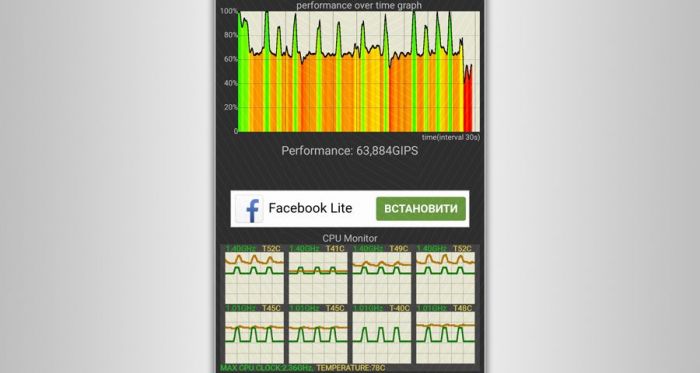 Honor 10 has built-in artificial intelligence features that help improve color reproduction and overall photo quality. In fact, I personally noticed that he just winds up the saturation, and nothing more. It also seemed to me that the photographs lacked a lot of detail, but the built-in algorithms are trying to artificially create it, adding sharpness to objects and glossing over “grainy” areas. The HDR mode works quite quickly, but its presence is, unfortunately, not always felt. When shooting video, the lack of any stabilization affects, but you can record in 4K resolution and do post-processing using Google Photos, which we wrote about here ( http://andro-news.com/news/killer-fichi-google-photos .html ). Of course, this is a crutch, but otherwise you will have to put up with jerky pictures. In low light conditions, photos are blurry. My general opinion about the camera is far from rosy. I am attaching sample photos to the article so that you yourself can evaluate the quality of shooting in different conditions. 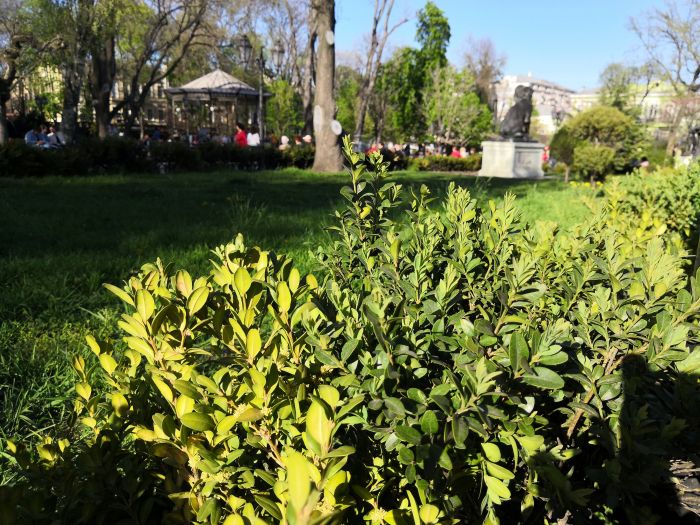 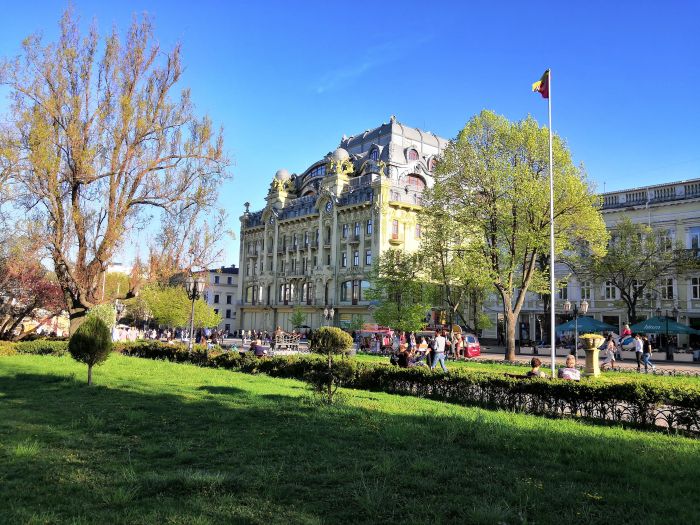 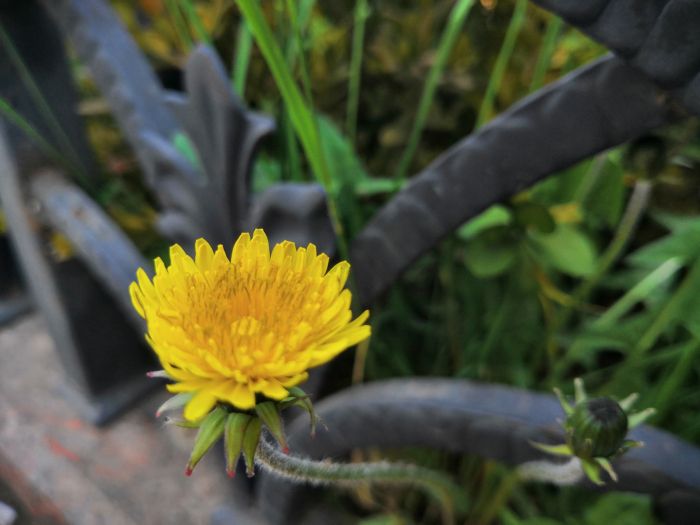 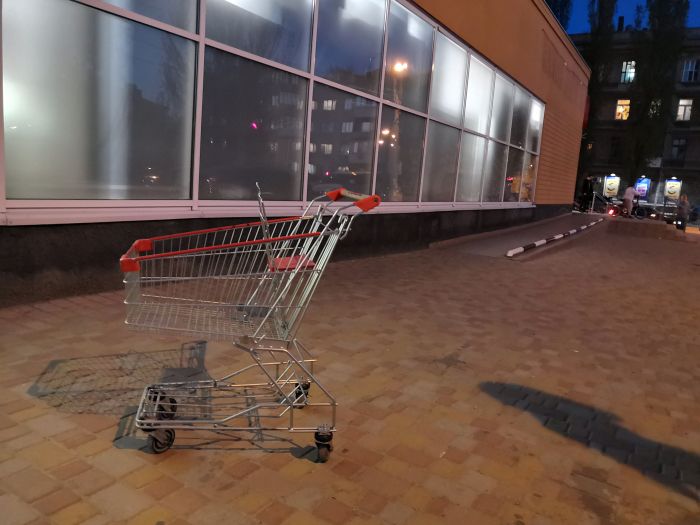 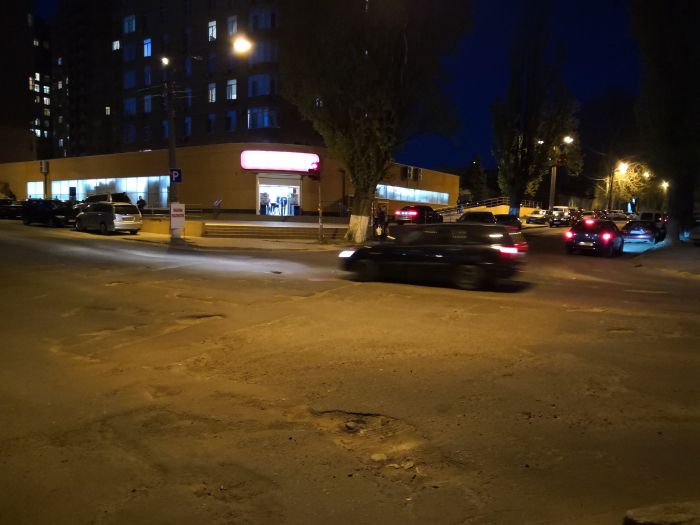 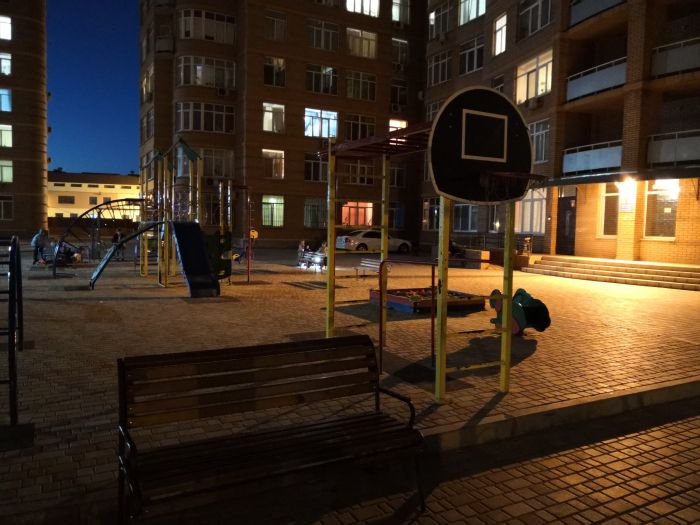 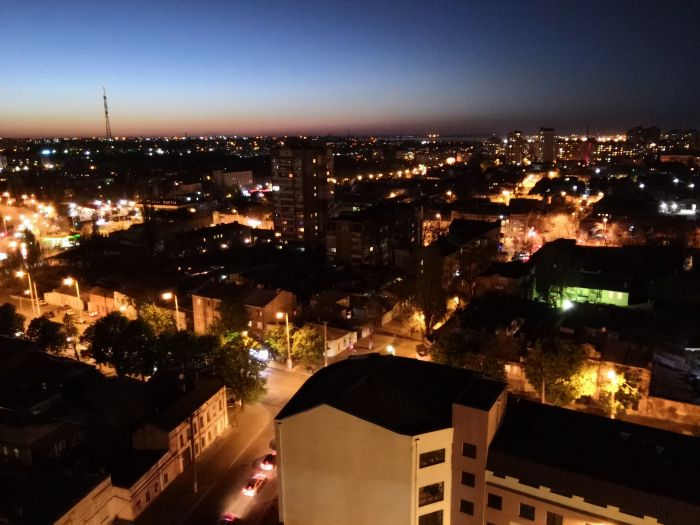 With communication, Huawei has always been good and this device is no exception. The speaker is quite loud, the sound is pleasant, without distortion. The microphone is generally worthy of special praise: it captures the voice amazingly, and the active noise canceler cleans up third-party noise with high quality. I will even say this: this is one of the best phone microphones that I have ever tried. 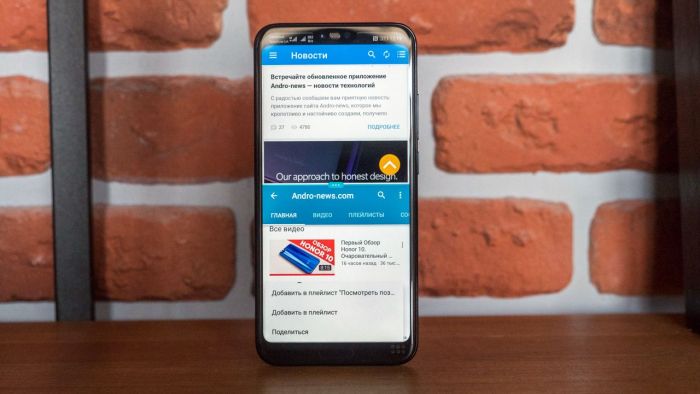 Splitting the screen is also supported, if the knuckle is swiped across the display. In the settings, you can choose one of four types of system navigation: fingerprint gestures (very convenient), standard Android on-screen buttons, a smart navigation strip with gesture support, and a floating navigation button. Despite the fact that it is convenient to use the smartphone with one hand, the developers have taken care of the settings of the mini-window, which can be called up with a simple gesture. In the curtain, among other things, such nice things are available: a flashlight, a screenshot, a screen recording, an energy-saving mode, “eye protection” (blue filter), etc. 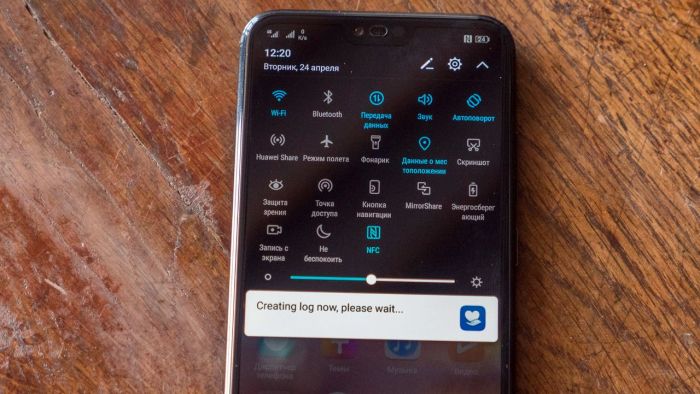 The built-in battery has a capacity of 3400 mAh and this is barely enough for 1 day of active use. During the night, the smartphone loses 6% of its charge. Charging is via a USB-C port. Supports fast charging technology Super Charge. You can see the charging history from 0% to 100% below:

As in the Huawei P20, from which this smartphone takes an example, the back cover is made of glass, but wireless charging, as they say, was not delivered. Of course, this is not the most important feature, but it is better to have it than not to have it. 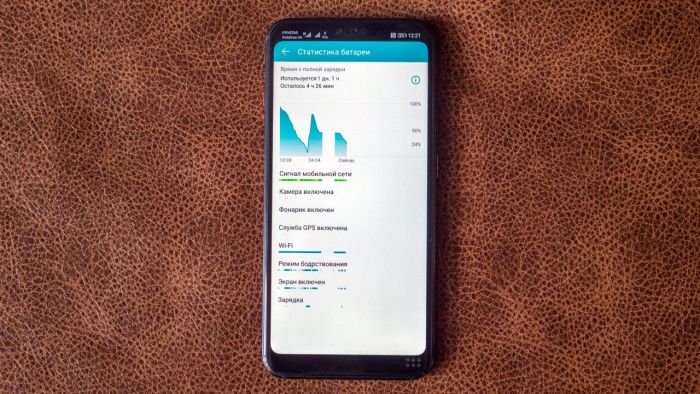 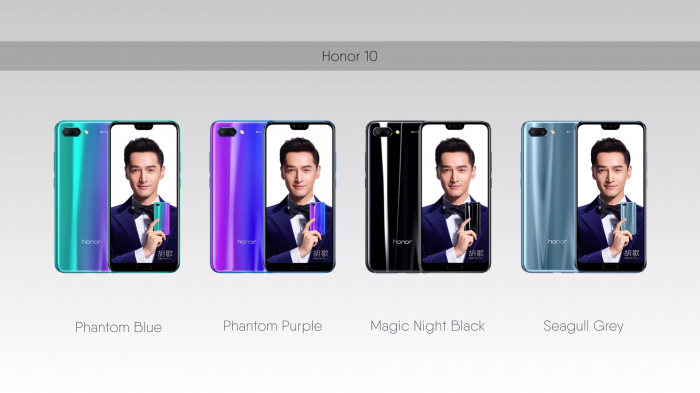 Where to buy and how to save?

⇒ Wherever you decide to buy Honor 10, on ALiexpress or within your countries, don't forget to save on your purchases with Cashback - https://goo.gl/n9Q3w4 ⇒ How to use cashback? - https://goo.gl/VY25Sn

It is sad to admit it, but at a time when the cost of flagships fluctuates around $ 1,000, the Honor 10 smartphone for $ 410-480 (with 64 or 128 GB of ROM, respectively) is a typical representative of the middle price segment. We understand your indignation in the comments, we even share them, but this is a fact that needs to be accepted: 300-600 dollars is the average segment. And considering the fact that Honor 10 has a cost 2 times lower than that of Huawei P20 Pro, I would not say that it is 2 times worse. Yes, there is nothing new in it: an absolutely passable smartphone that will not lead the revolution in the market and is unlikely to become a bestseller in general, but it is just a good device that leaves a very pleasant impression. 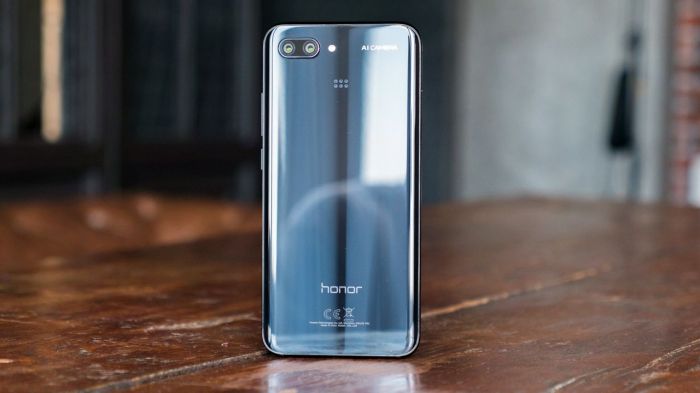