Meizu 16 th review - your next smartphone

From year to year, Meizu tried to rehabilitate itself in the flagship segment, either showing incredibly boring and even mediocre devices, or surprising everyone with non-standard solutions that remained not very useful in practice. And now, just 4 months after the announcement of the Meizu 15 , 15 Plus and 15 Lite smartphones, the company made another attempt to win the hearts of customers by introducing flagships to the world, under the slightly strange name Meizu 16th and 16th Plus (“sixteenth” and “sixteenth plus”) , explaining the naming by the fact that the company is now in its sixteenth year. The younger version came to our review, which differs from the Plus only in dimensions, increased battery capacity and an internal storage option of 256 GB. 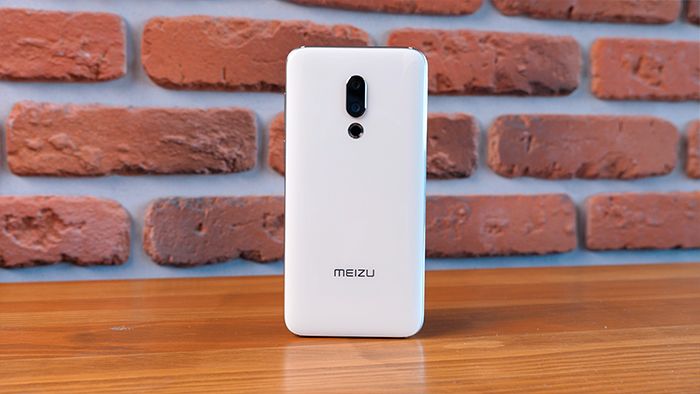 In the same way as in the case of the Meizu 15 line of smartphones, in the new flagships, the company decided not to chase dubious trends, leave the 3.5mm headphone jack in place and not spoil the symmetry of the front panel with a bang. And the only thing that has changed compared to the previous generation is the aspect ratio of the display, now it's more modern 18:9. In addition, Meizu 16th, with its dimensions of 150.5 x 73.2 x 7.3 mm, feels significantly more compact than its rival Xiaomi Mi 8, but wider than the narrower and taller Honor 10. 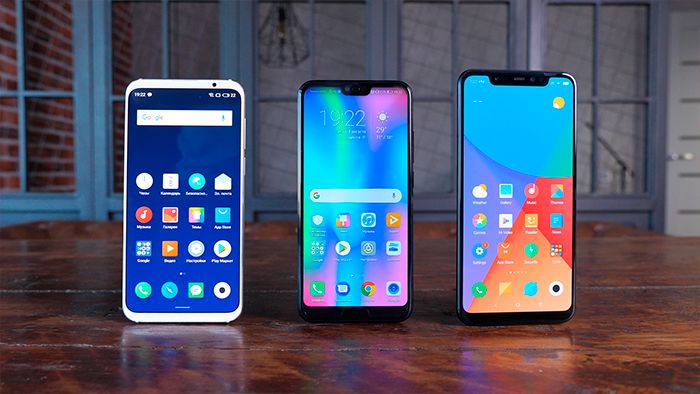 Also, the case materials have partially changed, now the back is made of glass, and the side faces are made of chrome-plated aluminum. This version of the design is a bit like an iPhone, especially in that the chrome edges are very quickly covered with scratches. Separately, it is worth noting Meizu's attention to detail: the sensors on the front panel are very neatly hidden here, the indentation above the display is exactly the same as below, the flash on the back panel is made the width of a dual camera module, and all the buttons and connectors on the sides of the case are located although slightly below the center, but in one line (at least visually it seems so). 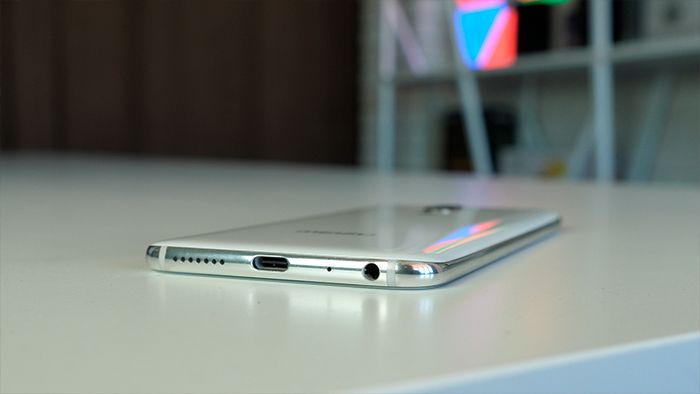 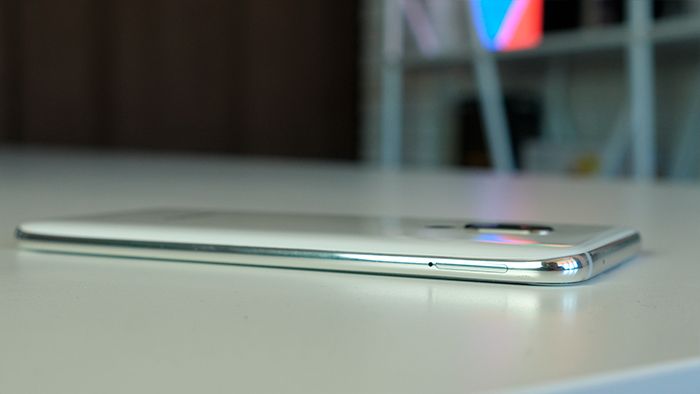 Meizu 16th is equipped with a 6.0-inch display with a resolution of 2160 x 1080 pixels and a Super AMOLED matrix, the maximum brightness of which is 430 cd / m2. In fact, the screen is of very high quality, the color reproduction is set correctly, there are no blockages in one or another shade. And unlike Xiaomi Mi8, even in the most saturated mode, the gradation of colors is visible here. Also, the color rendition can be customized by choosing the appropriate option from the 4 suggested presets. In addition, the Always on Display function is also available, which, in addition to the time and date, can also display notifications (and hello Xiaomi Mi8 again). 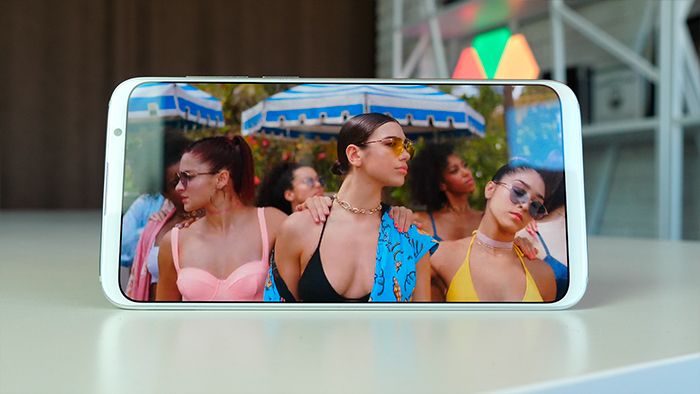 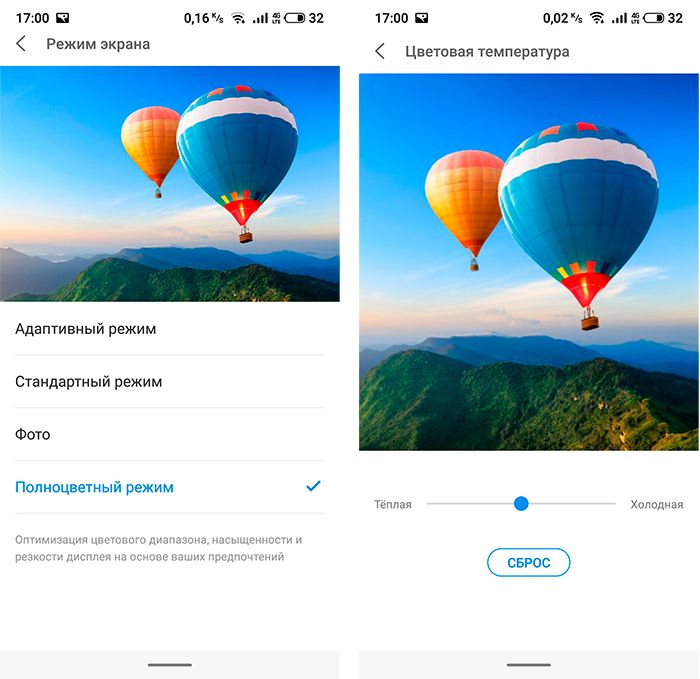 For the security of stored data, the smartphone uses a fingerprint scanner and a face recognition system (software). In general, this is a standard set of smartphones in 2018, but what surprised me was the location of the fingerprint scanner - it was placed under the screen of the smartphone. There are still complaints about the speed and accuracy of both unlocking methods. Most often, it is much easier to enter a password than to wait until the smartphone recognizes a face or a finger. But it should be borne in mind that there was a pre-production sample on the test, so all these points will still be finalized. I note that the fingerprint scanner works even with a protective film or glass glued to the display. 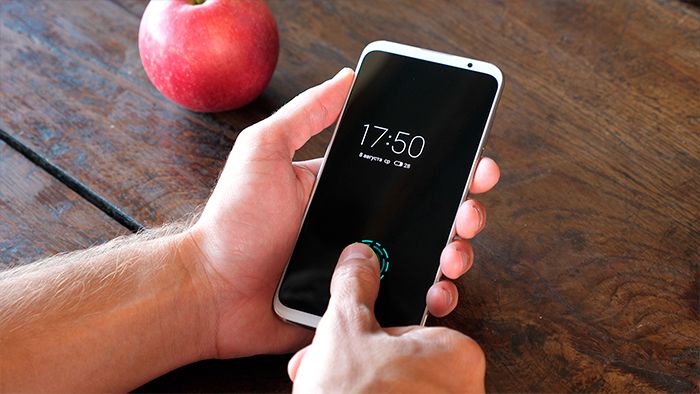 With its main role as a dialer, Meizu 16th does an excellent job. Under any conditions, both interlocutors hear each other clearly, and the smartphone keeps the connection quite confidently. But it is worth clarifying that although the Chinese version of the device does not support 7 and 20 bands, the international version, which will be officially sold in our countries, will support all the necessary 4G bands (3/7/20). Meizu 16th also keeps the Wi-Fi signal excellently. When other smartphones were already losing connection with the router, Meizu still had a stable connection.

To achieve a stereo effect in a smartphone, multimedia and conversational speakers are used simultaneously. The first one is for medium and low frequencies, and the second one is for high frequencies. The sound quality, at the same time, is at a very good level: high frequencies do not stick out, do not ring or rattle, even at maximum volume there are no distortions or overloads. But with the sound in the headphones, the situation is ambiguous. On the one hand, there are no special complaints about the quality, the frequencies are balanced, the vocals are heard perfectly and the volume reserve is certainly enough for everyone. On the other hand, unlike the Meizu 15, there is no dedicated audio chip, which is a little disappointing given the company's musical background. But in fact, if you don’t find fault and remember the price tag of the novelty, then there are no complaints about the sound in the headphones and cannot be. I note that in the Square Sound menu you can apply various effects, as well as adjust the frequencies for yourself using the equalizer. 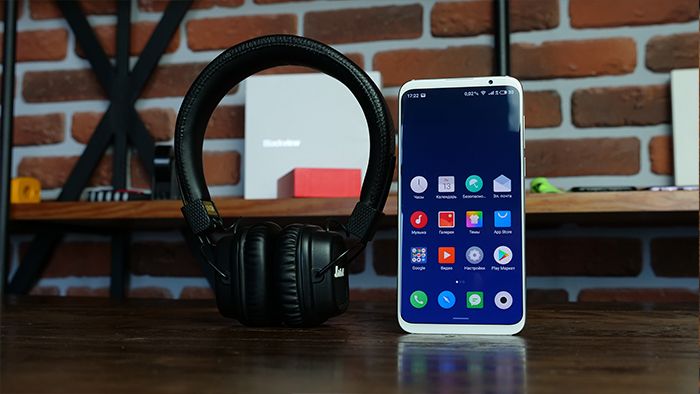 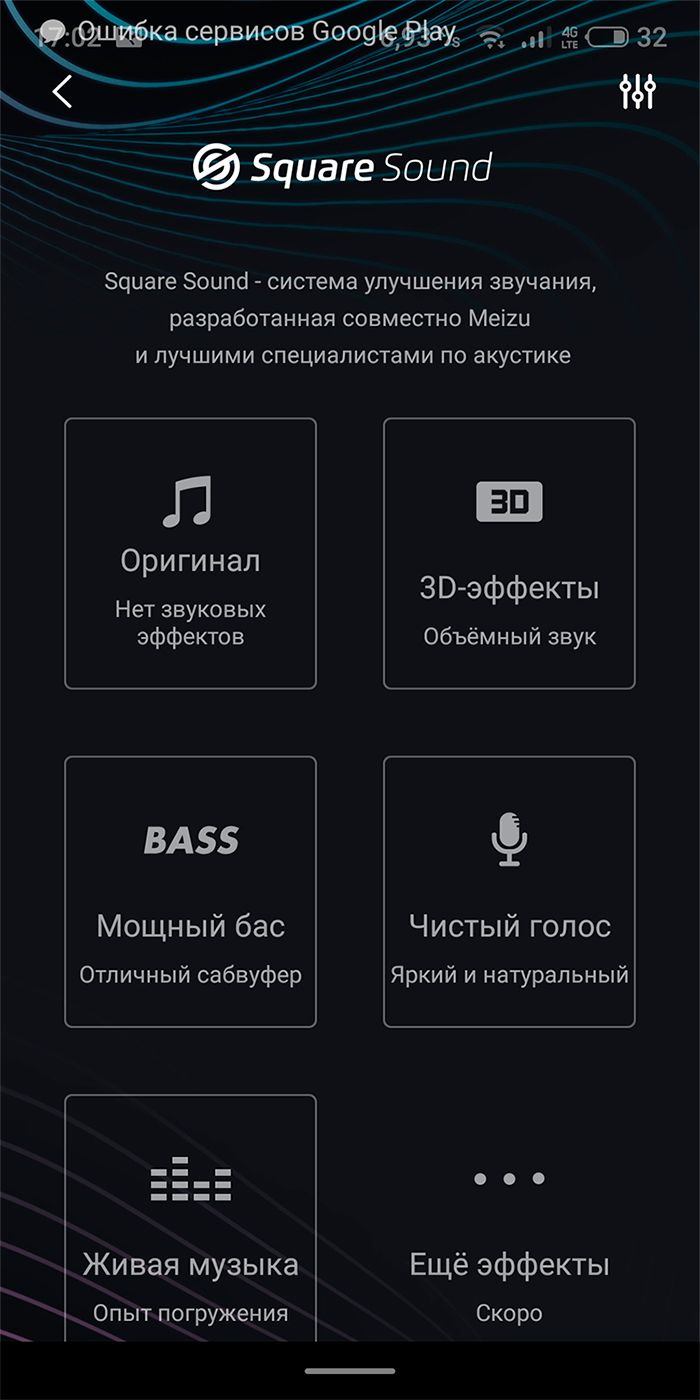 In terms of filling, this time Meizu was able to please everyone by installing not the controversial MTK or Exynos, but the best flagship solution of 2018, the Qualcomm Snapdragon 845 with the Adreno 630 graphics core. We have a version with 6 GB of RAM and 128 GB of ROM. Configurations with 8 GB of RAM and 64 or 256 GB of ROM are also available (in the 16th plus model). Naturally, with any tasks, whether it be surfing the Internet, a messenger, or even heavy games on ultra-graphics settings, such a bundle copes with ease. Synthetic tests only confirm the observations - the performance will last at least another year, and I propose to attribute rare freezes to a feature of our test sample. 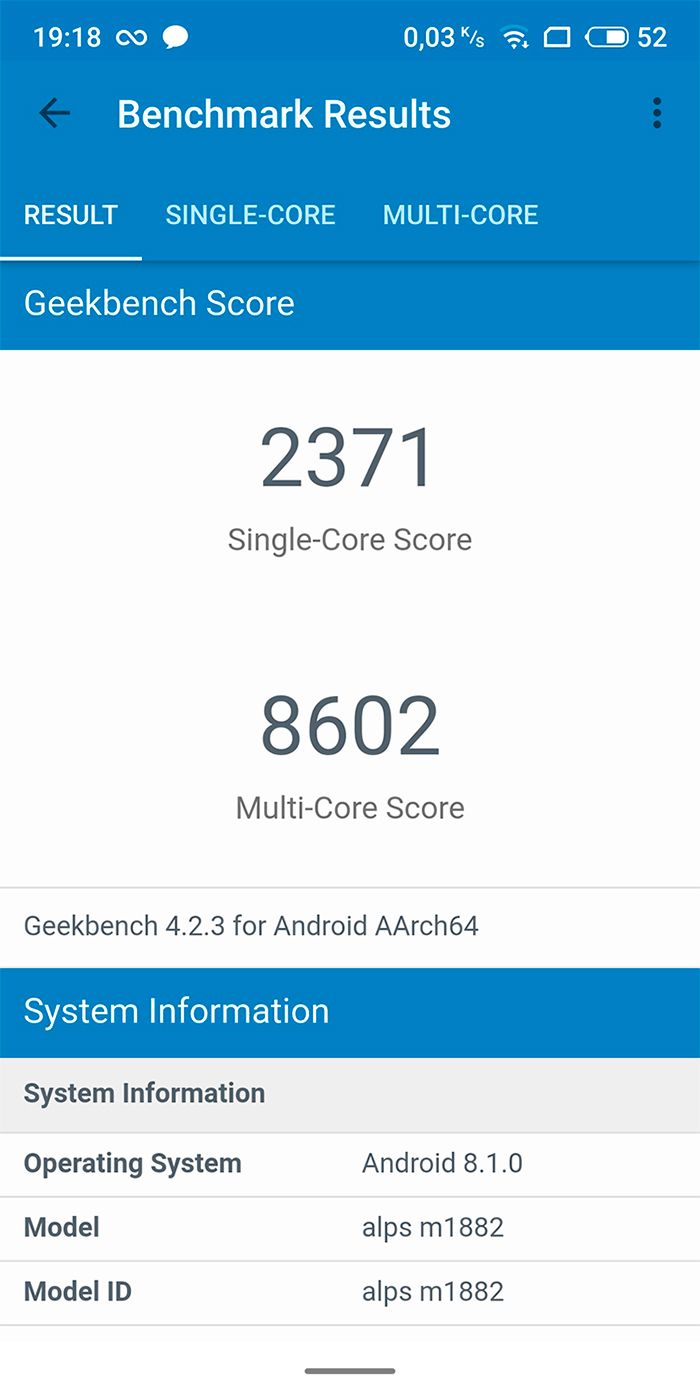 But unfortunately, despite the fact that a lot of attention was paid to cooling the smartphone at the presentation, the device still gets very hot even with such a not very difficult task as browsing, and after 15-20 minutes of talking via Skype, the smartphone turns into an iron. For half an hour of playing PUBG, the back cover of the smartphone heated up to 48 degrees, and the metal edges were even hotter. 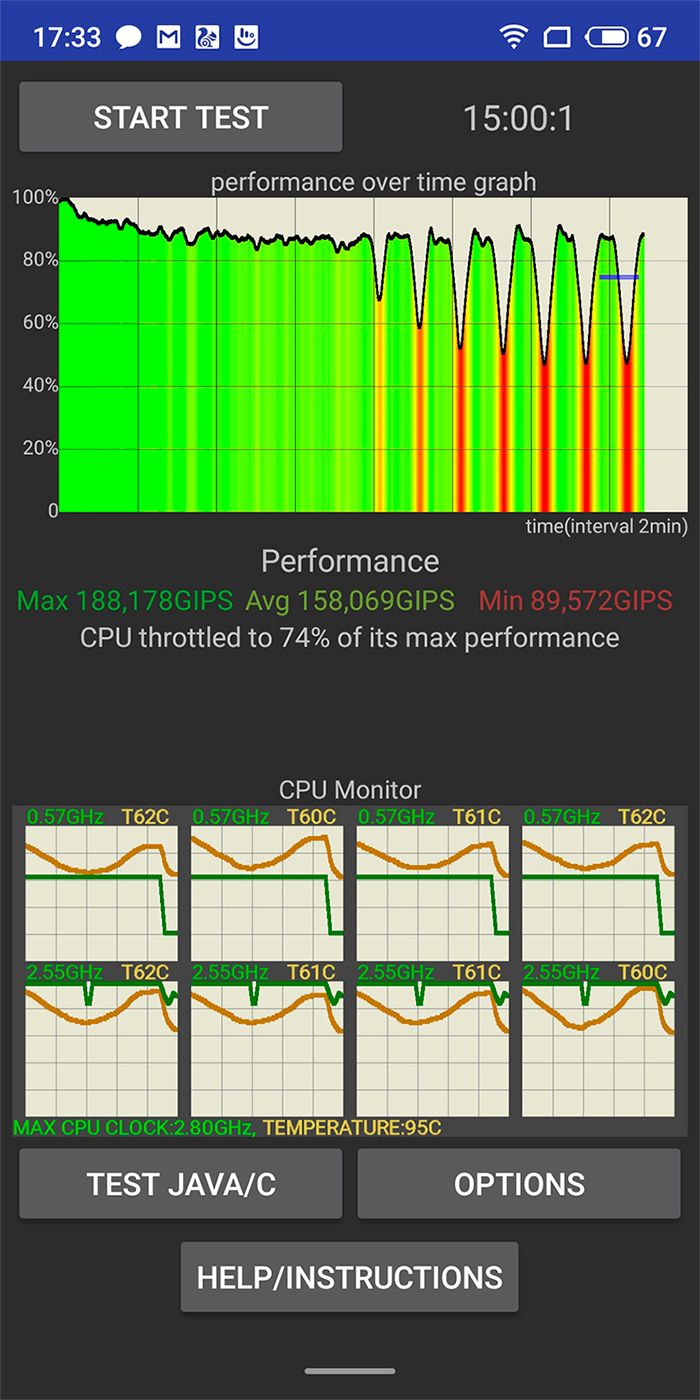 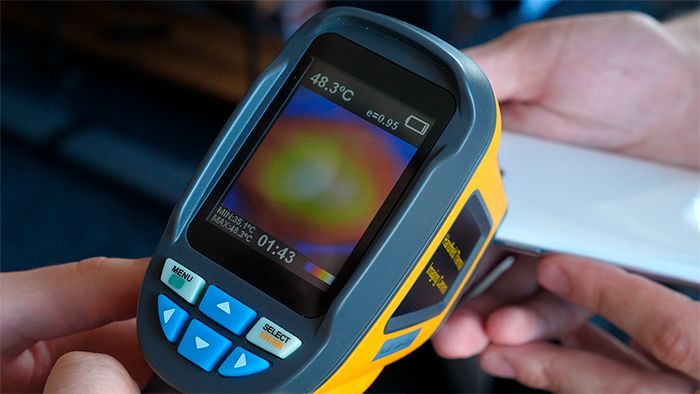 Meizu 16th cannot be called a long-liver: a 3010 mAh battery lasts exactly for a day of normal, not very active use, that is, social networks, instant messengers, a few games and photo video shooting. Just recently we did a big battery test where this smartphone managed 6 hours of mixed use - a little more than the Honor 10 and a little less than the OnePlus 6. In general, this is normal, but if you are a very active user, maybe you should play it safe by buying a power bank.

Meizu 16th is running Android 8.1 with Flyme version 7.3.4. The appearance of the interface is very pleasant, everything is done in a single style that fits well into the overall design concept of the system from Google. I was very pleased with the setting of ways to control the system, among which there are 3 standard Android keys, gestures a la OnePlus and a branded Super Swipe virtual strip, with a light touch of which the action is performed back, with a strong touch - the action is home, with a swipe up to the left or right of the button - the multitasking menu is called , and swipe left or right on the bottom bar to switch between applications. All this is so convenient and intuitive that you don’t want to return to ordinary gestures or buttons. In addition, hard pressing is accompanied by a pleasant tactile feedback of the mEngine 2.0 motor, which creates the feeling of a real button. 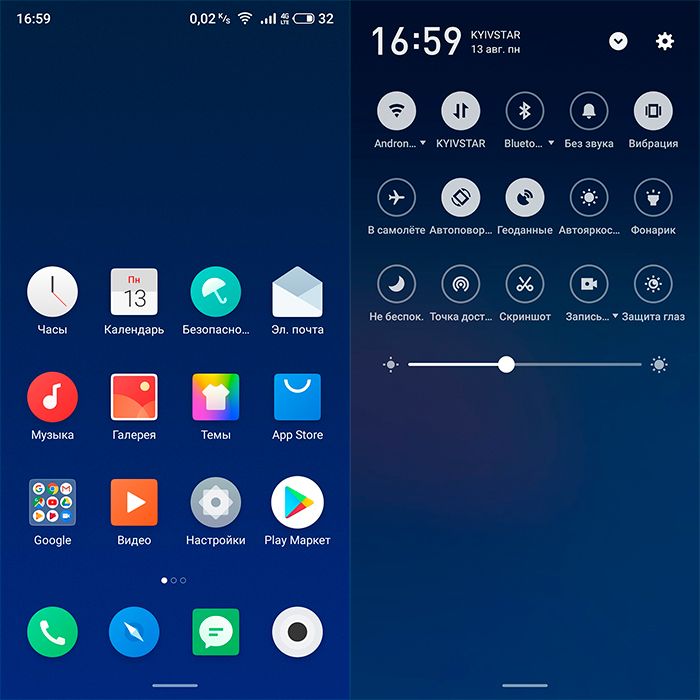 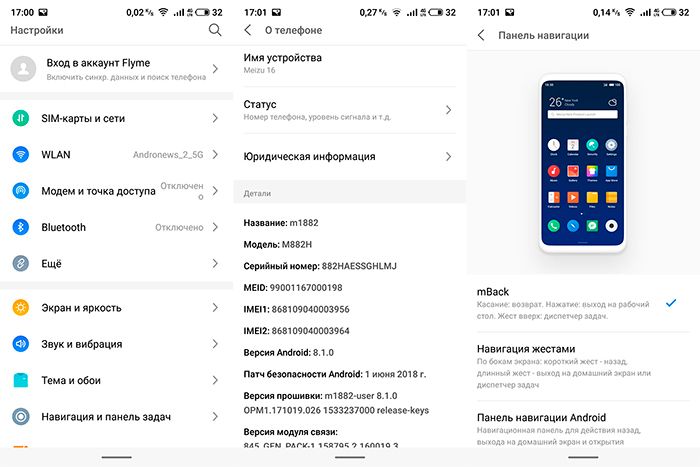 The system does not yet shine with stability, freezes, lags and various unpleasant glitches often occur, but you should not judge the smartphone strictly, since this is a pre-production sample and this behavior is quite normal, the main thing is that all these nuances should be corrected over time.

The main cameras are represented by 12 and 20 megapixel modules. The first (aka main) is the Sony IMX 380, with 1.8 aperture, 1.55 micron pixel size and 4-axis optical stabilization (a rather expensive sensor, by the way). The second is a telephoto that provides 3x optical zoom, it is the Sony IMX 350, with an aperture of 2.6 and a pixel size of 1.0 microns. On paper, it all sounds very good, but in reality things are as follows:

Daytime photos are just amazing. Without exaggeration - the flagship level. With detail, dynamic range and white balance, everything is in perfect order. Recently, in our review, we praised the camera of the Xiaomi Mi8 smartphone, but here even our test sample photographs exactly as well, and in most cases even better. Naturally, in future updates the situation should become even more beautiful. 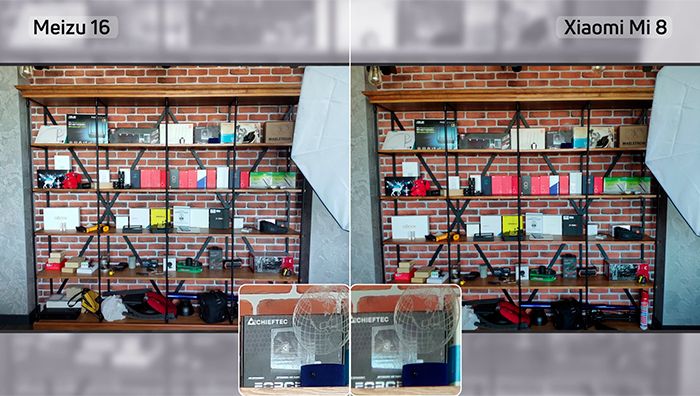 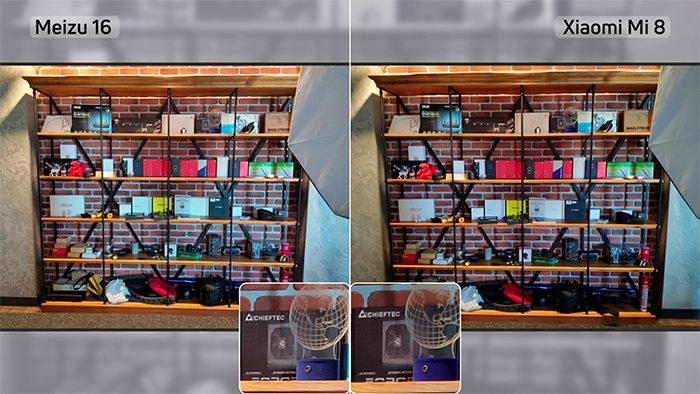 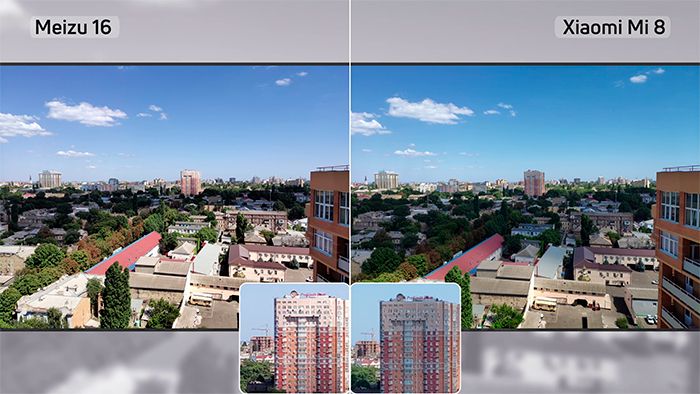 But not without a fly in the ointment: HDR, unfortunately, still does not work correctly. Artifacts are clearly visible in the photographs, and the detailing also becomes a little worse.

The front camera is represented by a single 20 MP module with f / 2.0 aperture

Unfortunately, there are problems with autofocus, which focuses not on a person, but on an object behind him, but what is even more annoying - manual focusing by tap does not help either. Apparently, these are again the flaws of the test sample. 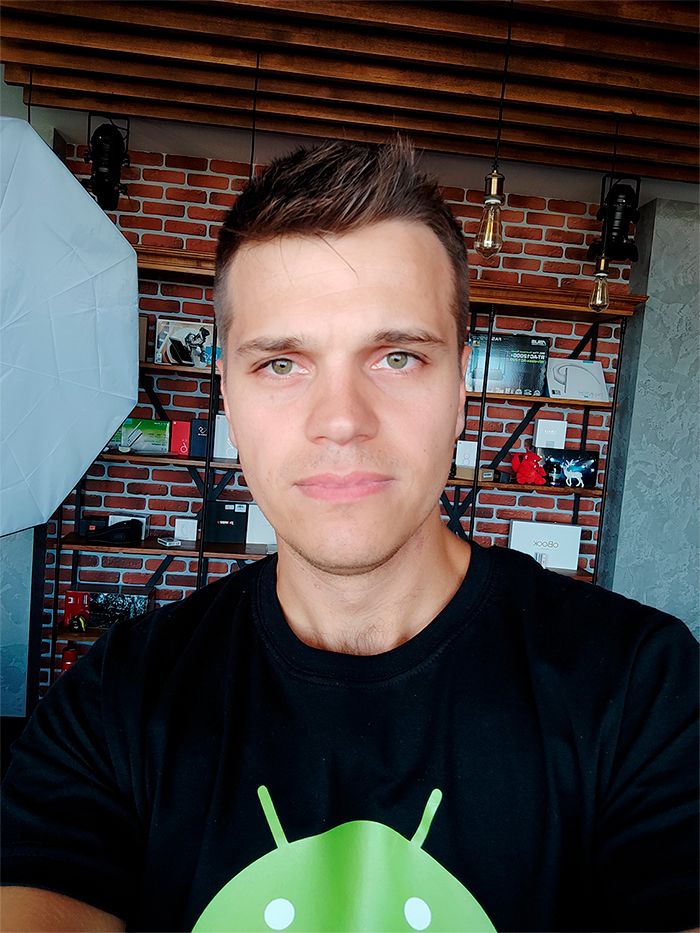 Video is recorded on the main camera in resolution up to 4K 30fps, but there is no way to check the quality, since video recording does not work on our sample yet, the whole picture is a solid green screen. In general, the still too raw software of our sample is to blame for everything.

After 10 days of testing a pre-production sample, we can safely say that Meizu turned out to be a very worthy smartphone with a lot of cool features and advantages, but inherited one rather serious annoying minus - the lack of a built-in NFC module. The company president again promised that this module would appear in the flagships of their company in the near future, but we heard the same promises after the announcement of Meizu 15. But if the presence of an NFC module is not so important for you, then Meizu 16th is a really wonderful smartphone and an excellent purchase option. At the very least, you should definitely pay attention to it.

- Multimedia speaker: One, on the lower right side. The speaker is used to achieve the stereo effect.