Realme teaches us that its smartphones are   light and compact, pleasant in the hands. At the same time, they have far from the latest characteristics in terms of display, hardware and cameras. And often the company fires such guns that become bestsellers and already compete with market leaders. And it seems that the realme GT Neo model is waiting for the same fate. Just look at these features. 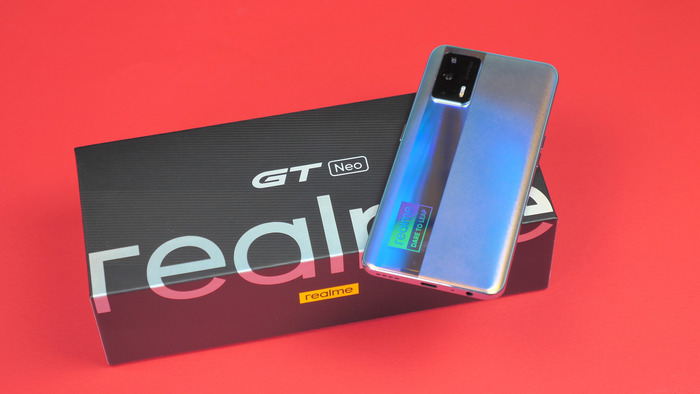 Let's start right away with the numbers on paper:

What's in the black box 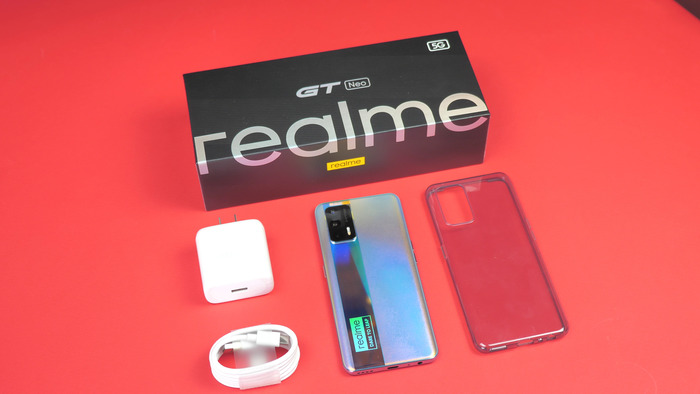 Now let's move on to the real acquaintance -   we open the package. A little about the packaging itself: given the universal concern for the planet, it is quite voluminous and is made in black (and we are already used to yellow). Inside, we are waiting for a separately packed silicone case with a paper clip and instructions, the smartphone itself and a USB type-C cable to it, and a charger unit is quietly resting under the smartphone. The charger looks nice, such a jar of white glossy plastic with rounded edges. 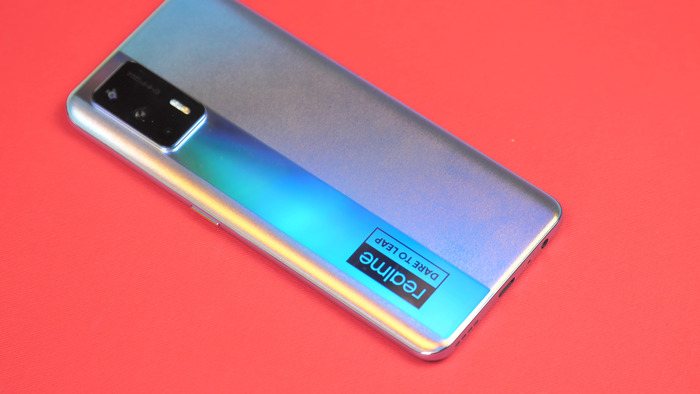 We tear off the veil from the smartphone - and GT Neo is in front of us in all its glory. We remember the previous version (without adding Neo ), and outwardly they are very similar to each other. Behind the entire width of the camera block, the back cover is crossed by a glossy mirror strip. It stands out against the background of a matte surface, which, by the way, is made of polycarbonate. According to the manufacturers, it is more durable than plastic. The material is pleasant to the touch, due to the roughness, fingerprints will not collect on the back panel. 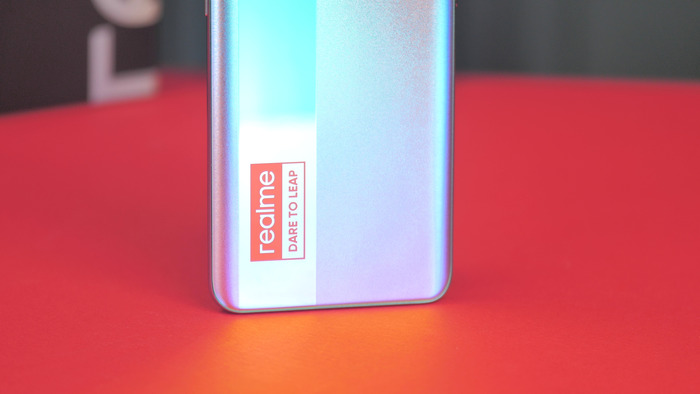 Don't forget about the inscription "Dare To Leap" -   along with the name of the Realme brand, it is located at the bottom of this strip and shimmers with all the colors of the rainbow. It is worth mentioning here that the frame is also made of plastic. Although it looks like metal, it is not; It is plastic with a glossy surface. 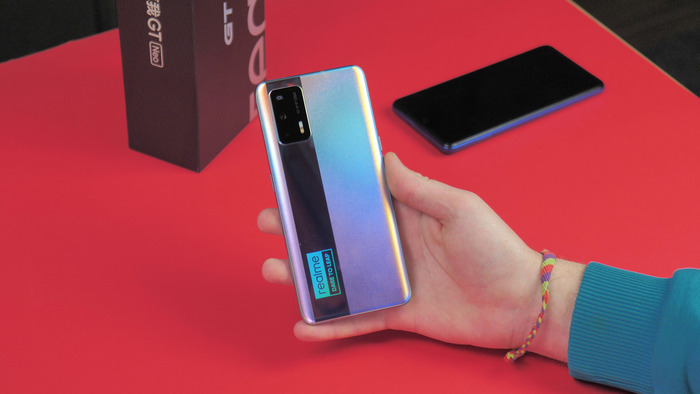 Dimensions, as we are used to seeing in smartphones from Realme, are quite comfortable for the hand. It has become a sort of tradition that it is smaller than the competition. But the iPhone 12 mini has yet to grow and grow before it. On the right is the power button (without a scanner, it is under the screen here), and on the left -   two volume buttons and a slot for 2 SIM cards. Unfortunately, there was no place for a memory card.

The camera block is also familiar, there is no know-how here. This is just a rectangular black platform in the style of Samsung A 51. In appearance, the model is very similar to Realme 8 Pro, if without a strip on the back. We'll talk about the display parameters a little later, we note only the cutout for the front camera in the upper left corner. It seems that a hole in the center of the screen would look more aesthetically pleasing. But this is an amateur. What do you think about this placement of the front camera -   is it important to you? 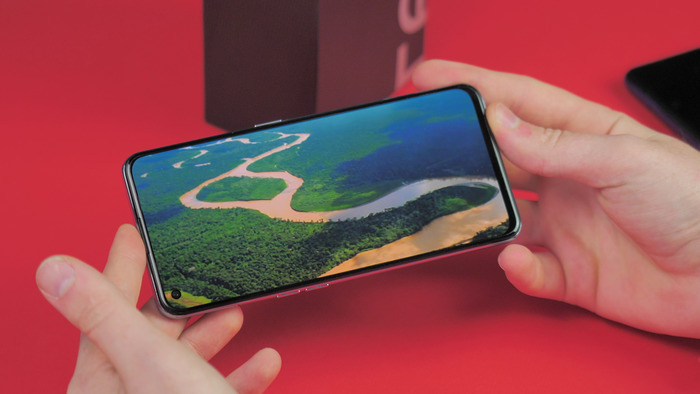 The screen of Realmi JT Neo has migrated from the previous version, and it is very good. A Super AMOLED matrix from Samsung is installed with good color reproduction and saturation. Claimed to be 100% DCI-P3 color coverage. If earlier it seemed that Realmi decided to stay away from the increased hertz of the display, then only not in the GT line. In the "sports car" the screen refresh rate is 120Hz. The response speed is also impressive -   360Hz. Always on Display was also delivered.

But an unpleasant moment is still present, and it is associated with PWM. There is no DC Dimming function here and at 30% brightness the device shows 124%! This is a hard blow to the eye! At dusk or indoors, with the auto-brightness of the screen, the eyes will instantly get tired. It remains to be hoped that this will be fixed through software updates. 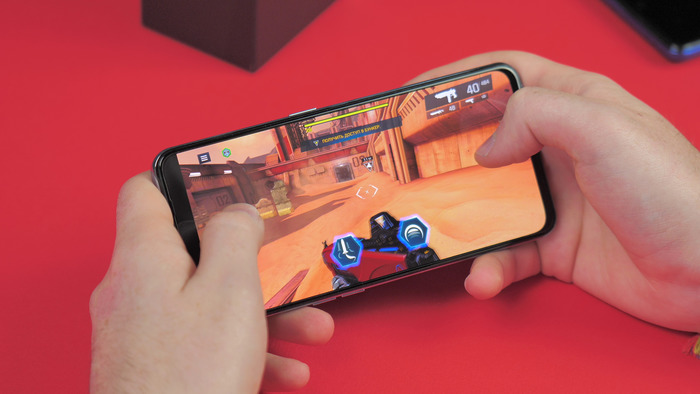 The two letters " GT" in the name clearly allude to its "sports engine". The GT Neo model has a new powerful chip from Mediatek -   Dimensity 1200 , made on a 6-nanometer process technology. Realme decided to be a pioneer and be the first company to install this processor in their model.

Well, let's check what it is capable of and how it interacts with the rest of the components and the system. First, the numbers: the maximum frequency is 3GHz. See what he does in the Antutu test: 702,000 points ! Based on the results, it is similar to the Snapdragon 870. 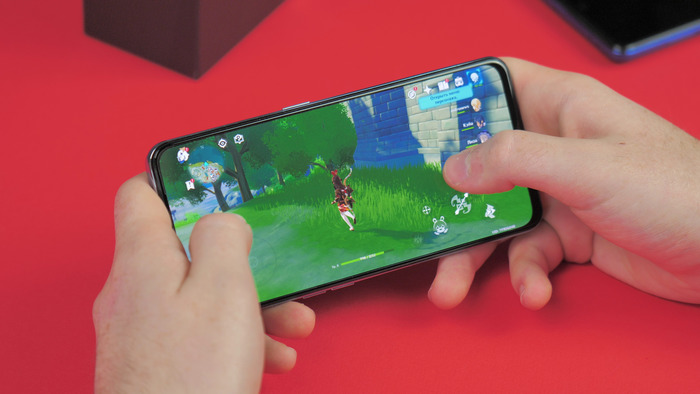 In practice, the processor really shows power. In the most demanding games, he boldly delivers 60+ fps . And the temperature remains normal throughout the entire time of use. At the peak load, the temperature was 47.5 degrees.

The smartphone provides steam cooling in a copper radiator with a large area. But users, by and large, do not care what kind of cooling: liquid, gaseous or even plasma. The main thing is that there is no heat in the hands and there is no drop in performance.

But the GT Neo RAM has not grown up to the new LPDDR 5 technology. Apparently, the processor from MediaTek does not support, so you have to be content with LPDDR 4 x . 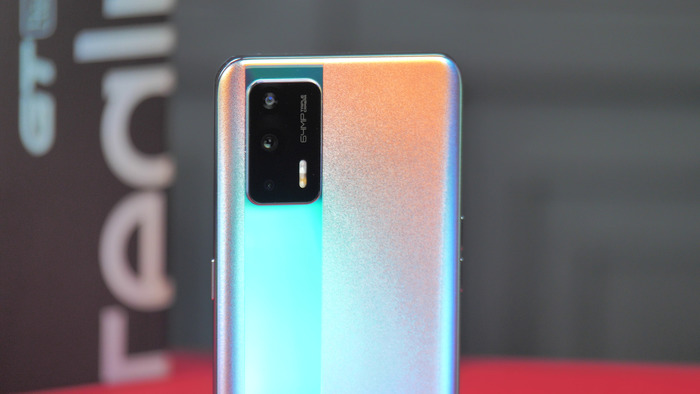 It makes no sense to talk a lot about cameras separately, since the set of modules in the model is quite standard. We have already made many comparisons of pictures taken with the Sony IMX 682 sensor: these are Xiaomi Mi 10 T , Realme 7 and 7 pro , Samsung A 52 / M 51 / M 31 S , and also Poco X 3.

Photos from the main module are clear and sharp in daylight and even in cloudy weather. In the dark, there will be something to complain about, but the night mode saves a little. In general, the software tries to draw out dark places too much, adding a lot of noise and “soap”. 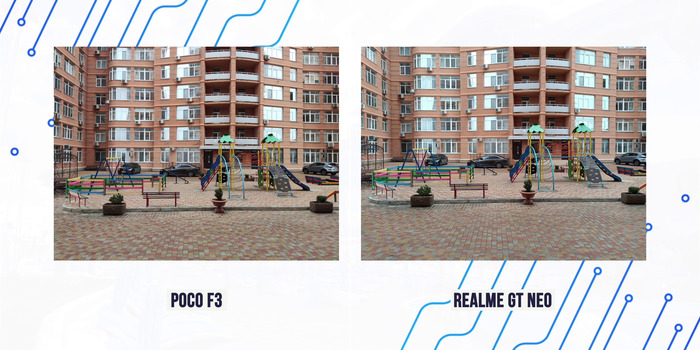 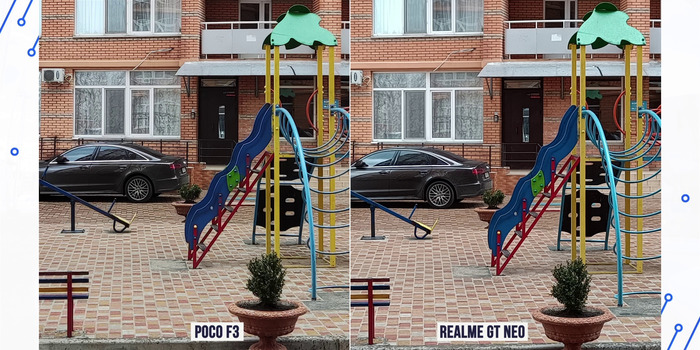 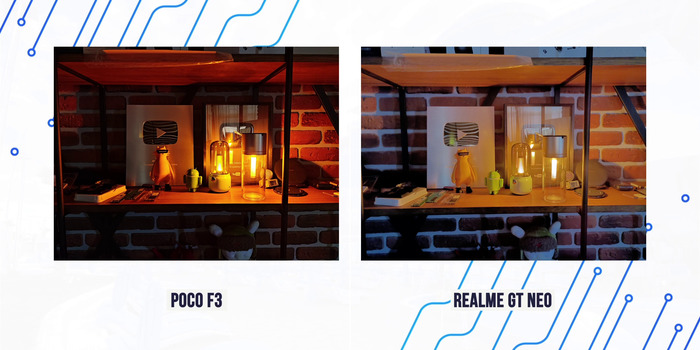 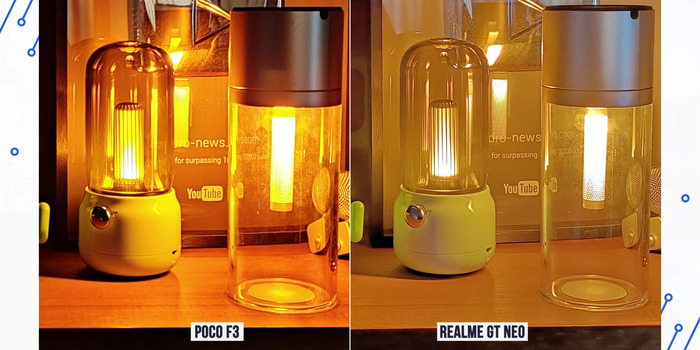 The ultra-wide module is mediocre - only for shots on a sunny day. Don't expect anything special from him. The same can be said about the 2-megapixel macro module. 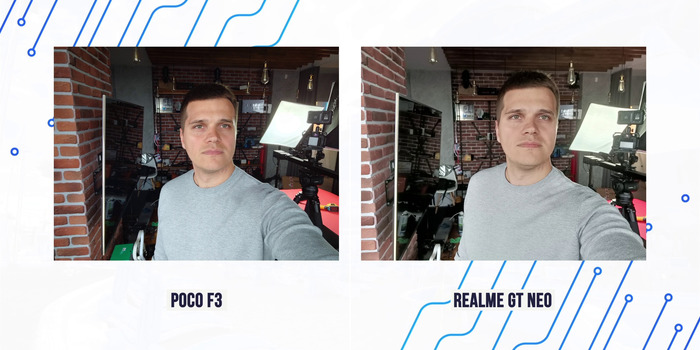 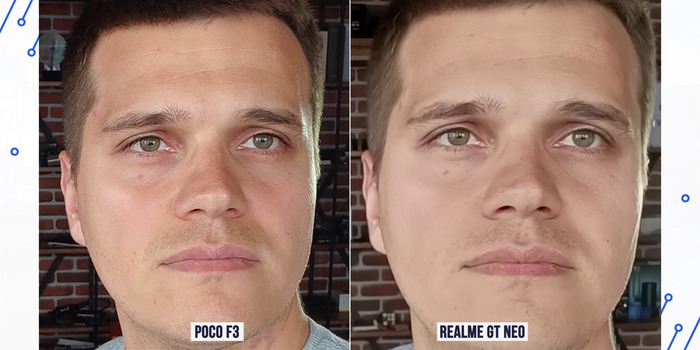 There is something to be said about the 16MP front camera - it's just terrible. This is quite unexpected, since we have not seen such a quality of frontal shots for a long time: very poor detail and color reproduction. Most likely, this is due to the processor from MediaTek , since it has its own image processing algorithms. It is not known for sure whether this will be fixed with updates or not, but there is hope. Still, the sensors here provide much better pictures than they turn out.

Electronic video stabilization only works when shooting in HD quality. And without it, you can shoot in 4K resolution and 60 frames per second. There is no HDR mode for video recording. 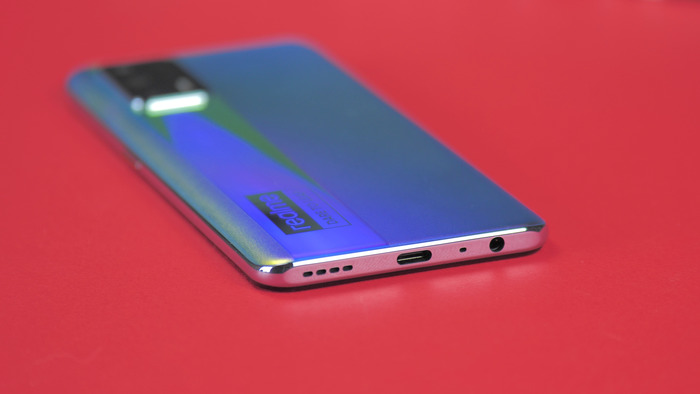 Two speakers are responsible for the sound, one of which is located on the bottom end, and the second one is spoken. There is support for aptX HD and Hi - Res Audio codec . As in the case of the 8 Pro , there is a stereo, it sounds good, but still not in a flagship way. Lacks bass and volume. 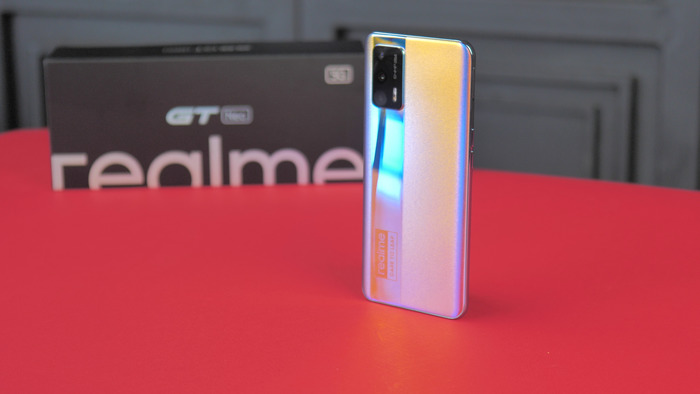 It's boring here too. A 4500 mAh bank is standard for Realmi models. Its life from one charge will last a little more than one day. It should be borne in mind that the refresh rate of 120Hz does its job and drains the battery much faster. Fortunately, the user is not deprived of a choice: smoothness of the picture or additional hours of life. 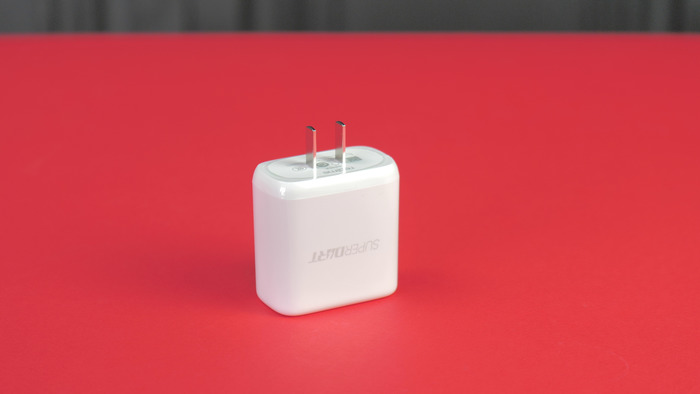 Fast charging is provided for 50W , although a 65W charging block is included. Realme claims that the battery will be half charged in 16 minutes . They should have said something about it... 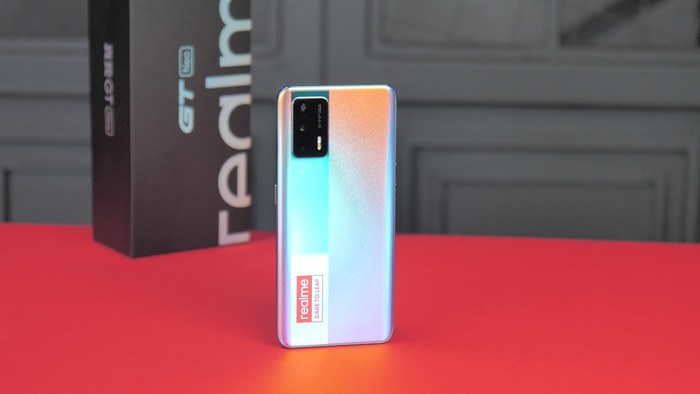 If you compare Realme GT with Realme GT Neo , then it's like 2 drops of water, only in different body colors and with different processors. The GT has Qualcomm 's top processor, while the GT Neo has MediaTek 's. Snapdragon 888 vs Dimensity 1200 . Everything is simple. But with the 888th “dragon” under the hood, the price tag immediately jumps by $ 120 up.

Well, if compared with models from other manufacturers, then perhaps the most interesting of them will be Poco F 3 from Xiaomi . Poco is oversized and not everyone will like it. It looks more spectacular with its glass cover and rounded camera block, but immediately loses in practicality, because. gets dirty very quickly without a cover. F 3 does not have an audio jack, charging is weaker and the camera (48MP) is weaker. As for the display, sound and hardware, in this they are both about the same. And then it's more interesting. For Poco F 3, sellers are asking for about $350 in the 6/128 GB version.

And based on the price category, it would be appropriate to mention Poco X 3 Pro . It costs $270 and is also made of plastic (although the build quality and materials are definitely worse). A capacious 5160 mAh battery still does not help offset weaker charging. But one more thing: a weaker SD 860 processor, an IPS screen (but without PWM), the camera shoots even worse than its fellow F 3. Draw your own conclusion.

All the best and may Android be with you!