The Poco M3 is able to attract a mass buyer, but beware - this is an affordable and compromise smartphone

Practicality rules, but with a catchy detail

Eight cores and a lot of battery

Three cameras is an unnecessary luxury

Large screen, hefty battery and boring design. We are talking about Poco M3, which until the announcement of Redmi Note 9 4G in China looked like an independent product with unique features.

It so happened that now really good Xiaomi remained only among the “senior” state employees, and then under the Redmi brand, and the most sophisticated flagships of the company, even in Chinese stores, are inadequately expensive. And then all of a sudden, fans of cheapness decided to help out Poco, who, after the release of Poco M3, announced that he had grown stronger, gained experience and was ready to “topple mountains” alone. From now on, he does not want to be a company "on dancers" with Xiaomi and is ready to increase his own prestige in the eyes of the public.

In theory, the Poco M3 should be a comfortable device, both in terms of its capabilities and the cost of acquiring it. Let's try to figure it out with all this "beauty", because even with all the characteristics, this Poco smartphone actually does not work the way you expect from it.

Practicality rules, but with a catchy detail

Since the advent of smartphones with a waterdrop notch for the front camera, they have been teased, annoyed and scolded with their last words for the monotony and dominance of such devices. And now there are no words and associations left to somehow describe the solution with a drop-cutout in an original way. Therefore, we suggest simply taking into account that the facade of the Xiaomi Poco M3 is the most typical smartphone for our days, which received a display with relatively small frames, and a selfie camera in the hole in the center, and such a cutout is called a “drop”.

They tried to achieve some degree of premium by the fact that the back panel, although made of plastic, is textured and friendly. No frills in ease of use. The smartphone lies in the palm of your hand comfortably, reliably and tactilely pleasant. Poco M3 came to us in black, but it is presented in three colors, including blue and yellow colors. Despite the fact that a capacious battery is “buried” inside, the smartphone is within the normal range in terms of dimensions and does not exactly pretend to be a bulky device. 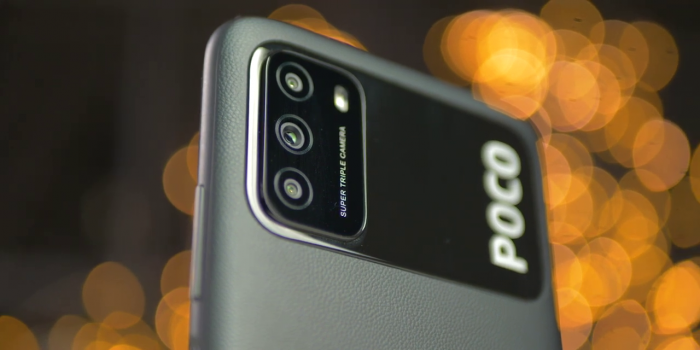 Another sign of this year is the means of identification in the side power button. In Poco M3, the manufacturer decided to abandon the fingerprint scanner on the rear panel, despite the fact that on the “back” the coverage area is higher and accidental presses are minimized. Apparently, the designers wanted to achieve a sort of integrity and solidity of the case in Xiaomi Poco M3, and also so that nothing would distract attention from the design of the main camera. Either way, the Poco M3's fingerprint scanner is nimble and hassle-free. At the top of the back cover, almost across the entire width, there is a glossy substrate for the main camera unit and the brand logo. Original and zakos under the premium OnePlus 8T Cyberpunk 2077.

There is a separate headphone jack, you can charge your smartphone using USB Type-C and another pleasant discovery in Xiaomi Poco M3 is a full-size slot: in addition to two nano-SIMs, there is a separate place for a microUSB memory card. Beauty, no pangs of choice! There is a cover in the kit, and the film on the display “from the factory” is pasted. One of the nice features of the Poco X3 smartphone is two speakers. The sound is not extremely loud, rich and deep. The gadget will not replace the music column, but watching the video and special effects in games “caress” the ear, Xiaomi Poco M3 sounds impressive for its budget.

The Poco M3 has a 6.53-inch IPS screen with a resolution of 2340x1080 pixels, it is an elongated 19.5:9 format. In terms of its capabilities and picture quality, it is in many ways similar to other inexpensive Xiaomi smartphones. The pixel density is not amazing, but sufficient to perceive the picture normally - 395ppi.

By most parameters, the display of the smartphone can be called normal and average in quality. Although "on the eye" looks decent. There are no problems with color reproduction and viewing angles, but the maximum brightness is “lame” - 400 nits. With such an indicator, it is not necessary to count on good readability of information on the matrix in direct sunlight. There are no premium features like increased hertz and increased sensor response rate, as well as a wide color gamut. The Poco M3 is a budget smartphone and it was necessary to save on something, and traces of cheaper prices are visible in which matrix they preferred here.

Eight cores and a lot of battery

Even if you accept the fact that the display here is not from the “top” category, then you should accept one more thing: despite the screech of rabid Xiaomi fanatics, it turns out that “Xiaomi smartphone hardware is not always the coolest for the dollar spent.” Do not forget that a low price tag always has a downside and this is savings. In the case of the Poco M3, the manufacturer should already say thank you for refusing to install “lame” budget MediaTek chips. 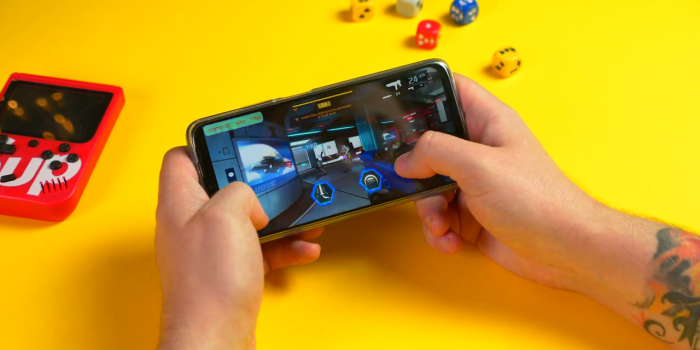 The Snapdragon 662 processor that powers the Poco M3 belongs to the middle class. For a small price, the chip offers a still state-of-the-art 11 nm process technology and will successfully cope with the main array of tasks. But at the same time, the chipset is not endowed with any “show-offs” of performance, and you definitely shouldn’t expect it to run modern games well, without jerks at high graphics quality.

In this regard, the Poco M3 has nothing to please. The smartphone does not have any serious gaming potential and does not show much zeal in games. You should also be prepared for the fact that sometimes Xiaomi Poco M3 will encounter minor difficulties in everyday tasks and, in general, it gives the impression of a leisurely device, a strong feeling that it does not “spit” at the limit of its capabilities. Snapdragon 662 tries to cling to modernity and maintain bravado, but the power reserve has already evaporated from it.

The Snapdragon 662 has another bad feature - it is a "glutton" in terms of energy. In Poco M3, they tried to mask this shortcoming by installing a battery with a capacity of as much as 6000 mAh, and also at maximum load they try to “choke” the frequency of the chip so that they eat less and do not “fly up” high. But the tricks to increase the duration of Xiaomi Poco M3 did not bring much effect.

On the one hand, this is a smartphone with a 6000 mAh battery, and on the other hand, look at which models are next in our proprietary battery life rating . So, the novelty is only slightly behind the Xiaomi Mi 10T Lite, which has a 4820 mAh battery and a 120-Hz screen. And all because the chip has to “feed” a large and voracious display with FullHD + resolution, and “crooked” developers applied their “skills” here and the miracle “we have super-autonomy here” did not happen. The hardware in the Poco M3 will not be replaced and one can only hope that over time the software flaws will be removed and the duration of work will be slightly tightened. But you shouldn't expect that this will lead to a serious increase in endurance.

Therefore, in terms of autonomy - nothing extraordinary. The smartphone can and will withstand its two days under normal load, but the idea of \u200b\u200bdriving it “in three necks” will have to be abandoned. Xiaomi Poco M3 has fast charging, which is great. In reality, a charge from 0 to 100% occurs in 2 hours and 47 minutes. For a long time? But the battery is not small here and the charging speed is at the level of competitors.

The amount of RAM is 4 GB, the Poco M3 does not jump above your head here. There are two options for flash memory: 64 GB and 128 GB. Provided that you can install a memory card up to 512 GB in a smartphone, everything turned out fine in terms of internal storage.

Triple camera is an unnecessary luxury

The Poco M3 uses a 48-megapixel Quad Bayer sensor and the company touts it as an advantage of the model. But the fact is that Xiaomi has been using modules with this resolution since Redmi Note 7, which debuted back in January 2019, so there is no need to talk about some kind of “wow effect”. In total, the Poco M3 received three cameras, but as is often the case in the budget segment, they are here for quantity. Two of the three sensors are responsible for macro photography and software background blur. As a result, removes only one module. 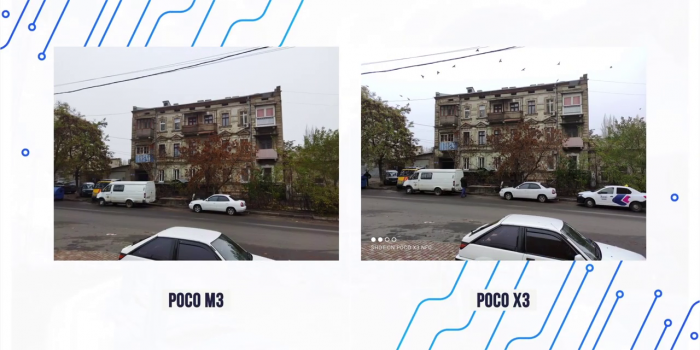 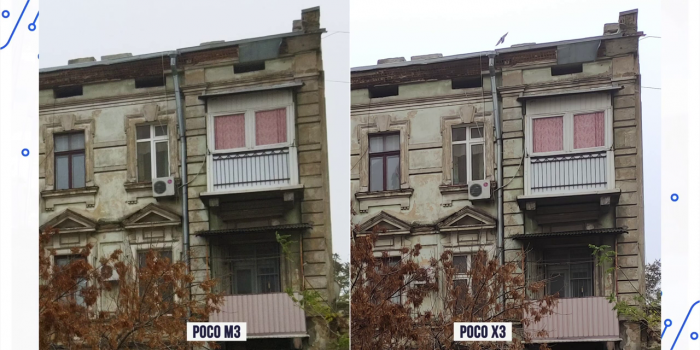 Despite the fact that the manufacturer stubbornly wants to give the impression that the Poco M3's camera has “pumped up” in its resolution compared to the Poco M2, it only shoots normally during the day. It is very important for the main module under what conditions the shooting is carried out. During the day, the camera produces quite decent shots, of course, with an eye on the budget. In the dark, the quality of shooting naturally falls and it is almost impossible to get a sharp shot. In all respects, the Poco M3 camera gives out that this is a budget solution and it was not “licked” here to the level “above only the stars”. The selfie camera did not become a revelation either. It copes with its duties well and this is an ordinary decision. 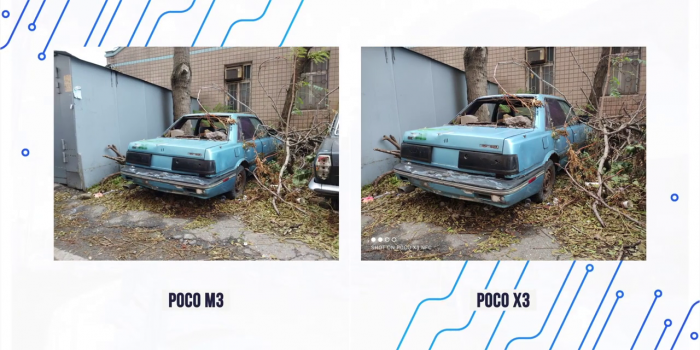 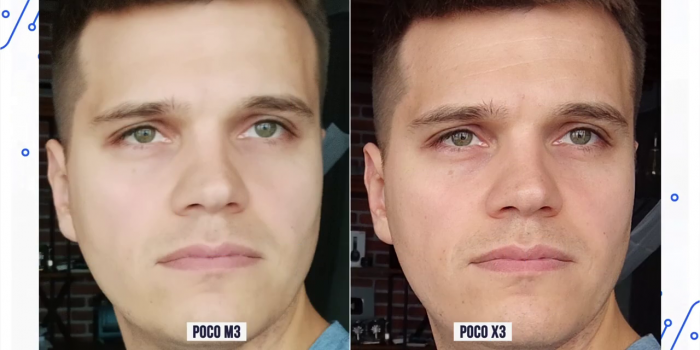 It sounds trite, but you should always make allowances for the fact that the Poco M3 is an economy option that cannot compete with smartphones of a higher class in terms of status. He shoots with his own money, and objectively, in terms of the quality of photo / video shooting, calling him outright trash is the height of injustice. The smartphone creates pictures normally and in order to upload a photo to a social network, it will fit perfectly.

Poco M3 is a good offer at the junction of entry-level and mid-range devices. Yes, after the start of sales, it costs a few dollars more than it should be. But do not forget about the biting realities of the falling rate of domestic currencies. Now Xiaomi is trying to make money on the rush demand, but over time the price tag will settle down and all the advantages of the Poco M3, however, like their troubles, will not go anywhere.

Objectively, this is one of the best smartphones in its price segment. NFC would have been here - and he would not have had a price. But if we ignore the lack of opportunities to make contactless payments, then the Poco M3 is a decent smartphone of its level, not perfect and with a number of flaws, but close to the dream of our person “all inclusive and without overpayment”.

What is good about Poco M3: