Qualcomm invites you to its presentation

There is little doubt that Qualcomm will introduce the Snapdragon 8 Gen 1 Plus chip this month. As is often the case, insiders were the first to report this, and now the company itself has announced its intention to hold a presentation. Today, the chipmaker announced that on May 20 he will arrange a presentation of Snapdragon Night in China.

Qualcomm does not name the products it intends to announce. But it is obvious that we are talking about a Snapdragon chip or chips, and Snapdragon 8 Gen 1 Plus and possibly Snapdragon 7 Gen 1 are seen as the most likely contenders for the announcement. According to available information, the main distinguishing feature and advantage of Snapdragon 8 Gen 1 Plus will be that The chip is produced by TSMC using its 4nm process technology. 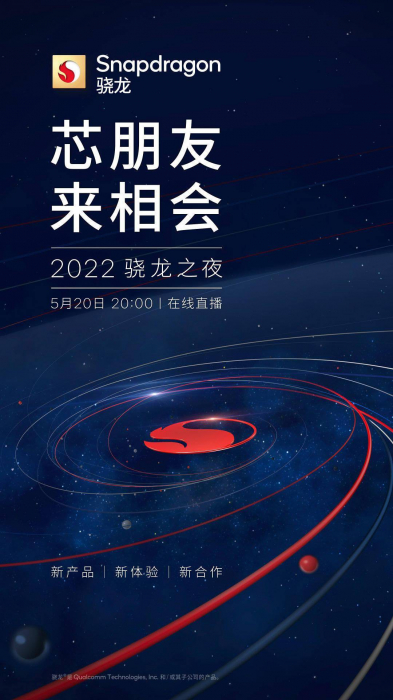 According to rumors, the Plus version will still use the "1+3+4" three-cluster core layout, which includes the Cortex-X2, Cortex-A710 and Cortex-A510 cores, respectively. The peak frequency of the high-performance core will be 2.99 GHz and the performance increase is promised at the level of 10%.

Snapdragon 7 Gen 1 will offer eight processor cores, four of which are Cortex-A710 and the same number of Cortex-A510. The Adreno 662 accelerator will be responsible for the graphics. In terms of performance, the new processor can be at the level of the Snapdragon 870, and the main focus is on energy efficiency. It is worth making a reservation that according to insider data, the release of Snapdragon 7 Gen 1 will be arranged a week after the release of the flagship platform.