In what versions it will be available and what's with the price tag, there is no information

In March, the Realme GT Neo 3 premiered, which will soon receive imitators in the form of OnePlus 10R and OnePlus Ace. Sales of new items have only recently started in China and now the company has decided to bring it to the global market. Today, she announced that on April 29 she will hold a presentation dedicated to the release of realme GT Neo 3 outside of China. 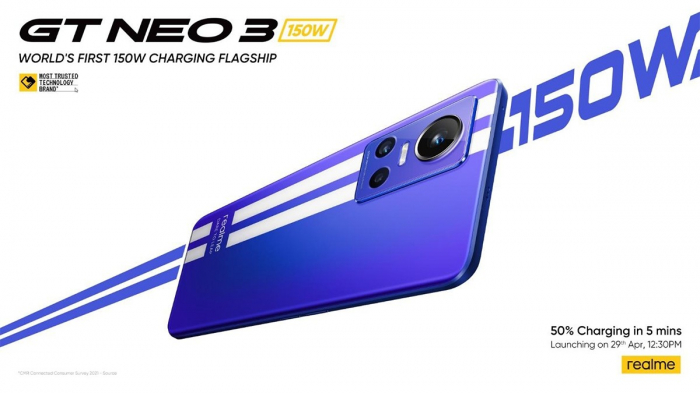 Recall that Realme GT Neo 3 was the first device with Dimensity 8100. It has a 6.7-inch OLED panel with a refresh rate of 120 Hz and FullHD + resolution, a 16 MP selfie camera, stereo speakers and a liquid cooling system. The set of sensors in the main camera includes a 50MP Sony IMX766 main sensor, an 8MP ultra wide sensor, and a 2MP depth sensor.

In the Chinese market, Realme GT Neo 3 is available in two versions, where one received a 5000 mAh battery and 80 W fast charging, and in the other, the battery capacity was reduced to 4500 mAh, but the charging power was increased to 150 W. In the home market, the smartphone is offered at a price of $315 and ideally in the global market the price tag will increase to $370-400.