The company saved on everything

Manufacturers are gradually accustoming us to an ascetic package. The presence of headphones and a case is already regarded as a luxury and is usually found on affordable models for the sake of increasing attractiveness. Today we get used to living when there is no charger in the box with a smartphone, and soon this will become the norm. But Sony decided to go the furthest, saving even on a paper clip.

A week ago , the Sony Xperia 1 IV premiered , which will only go on sale in the summer, but the famous blogger Marques Brownlee managed to get a smartphone for review and posted an unboxing photo on his Twitter. Opening the box, he found only the Sony Xperia 1 IV inside. The company decided that everything else was an unnecessary luxury. There is no charger, no cable, not even a paperclip to remove the SIM card slot. Moreover, there is no instruction manual inside. 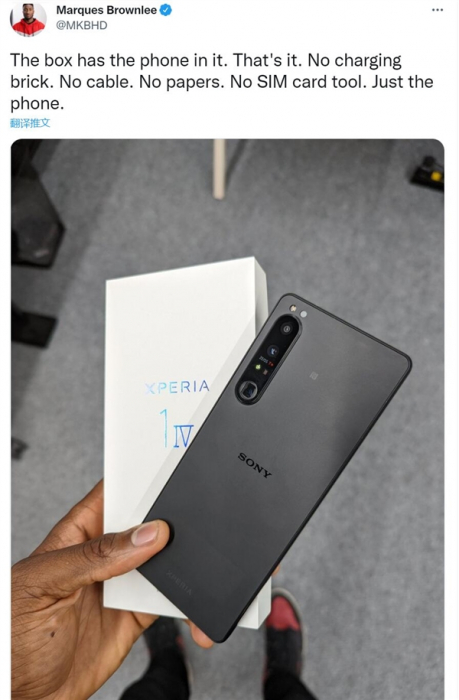 And this is provided that in the USA they asked for $1600 for the Sony Xperia 1 IV. The company considered that the buyers of such an expensive device are not poor people and will be able to buy the necessary accessories for themselves. The product is niche and only loyal Sony fans will obviously prefer it, and they already know how to work with a smartphone without any instructions.

Recall that the Sony Xperia 1 IV has a 4K OLED display with a refresh rate of 120 Hz, a Snapdragon 8 Gen 1 chipset, a 5000 mAh battery with 30-watt fast charging, IP65 / IP68 water protection and a triple rear camera with three sensors of 12 MP each with an optical stub and a variable optical zoom.