Comparison: top 4 smartphones under $250 from Andro-News

There are just a huge number of different smartphones on the market, from the cheapest to the incredibly expensive. And it is quite difficult for an unprepared person to understand this variety of brands and devices. This is especially true for budget devices in the price segment up to $250, because they are all very similar to each other, but each has its own advantages, disadvantages and various kinds of compromises. Therefore, we at Andro-News decided to take on this difficult burden and still try to choose the most worthy smartphone in this price segment. For this, we have selected the following 4 devices: Xiaomi Mi8 Lite , Honor 8X, Xiaomi Redmi Note 6 Pro and Asus Zenfone Max Pro M1. Unfortunately, at the time of writing the script for this comparison, we did not have the opportunity to test the Meizu X8, so it will not be here. Sorry.

For convenience, we have divided the comparison into 6 points:

For each of these items, smartphones were scored from 1 to 4 (the more, the better). At the end, we will calculate the total number of points that each of the smartphones scored, and thus determine the winner. In addition, important advantages and disadvantages of each smartphone will be additionally taken into account. Of those that were not taken into account in the comparison, but they are still worth mentioning.

To conduct this test, we installed several identical pictures on each smartphone and set the standard color rendering settings.

All smartphones are united by the use of screens with an IPS matrix, but the diagonals and resolution are almost different for everyone. Honor 8X has a display with a diagonal of 6.5 inches and a resolution of 1080 x 2340 pixels. As the test showed, it has the most accurate white balance and the highest maximum brightness among competitors, so we gave it the highest score - 4. The Xiaomi Mi8 Lite screen is slightly smaller, its diagonal is 6.26 inches, and the resolution is 1080 x 2280 pixels. It is inferior to the 8X in terms of white balance accuracy, but at the same time, it has excellent color reproduction and a sufficient margin of brightness, so we gave it a well-deserved 3 points. The display of the Redmi Note 6 Pro is identical to that of the Mi 8 Lite, both in terms of performance and color reproduction, but inferior to it in terms of maximum brightness, because of this it only receives 2 points. But the outsider in this test with 1 point in the pocket was Asus Zenfone Max Pro M1 (5.99”, 1080 x 2160 pixels). It has a noticeably lower maximum brightness, and the colors are not so saturated, and it is almost impossible to fine-tune the color balance - it still goes into a warm shade. 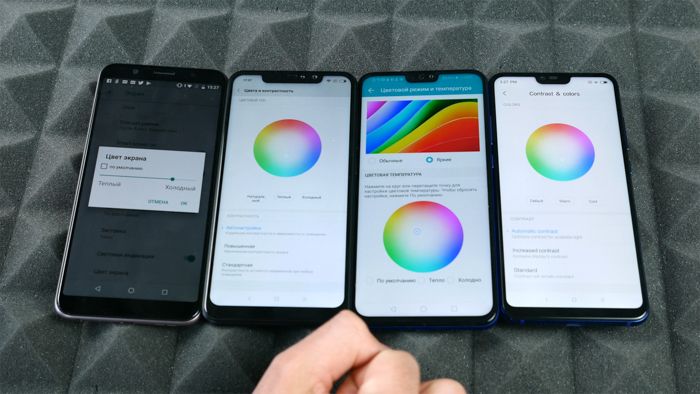 And so, the marks for the first test:

In order to objectively assess the performance of smartphones in games, we installed 3 identical games on them: of course, the mega-popular “PUBG”, “World of Tanks Blitz” with the FPS counter output, as well as the port from the PlayStation - “OddWorld: New and Tasty”, because this game is extremely demanding on the graphics core, has no optimization for video accelerators, and also has quite flexible graphics settings. 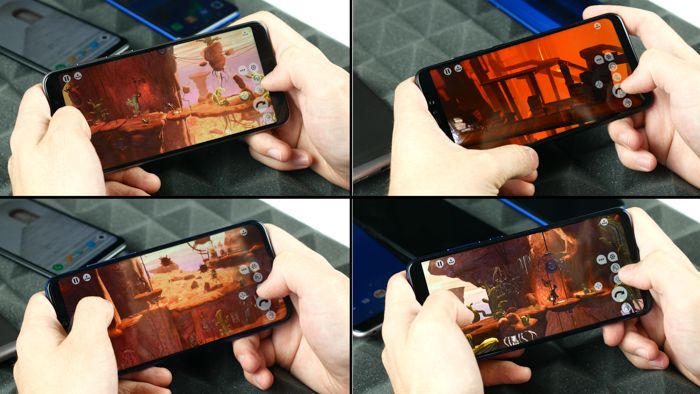 As for the results, the Mi8 Lite performed best in PUBG, which is not surprising, since it has the most productive video core. The Honor 8X is slightly inferior to it in this regard, which still showed excellent performance for such a price segment. Most likely, this is the merit of GPU Turbo technology and good optimization of the game for it. On the other hand, perhaps the fact is that for this game the power of the CPU is more important than the GPU. Surprisingly, Asus performed better than the Redmi Note 6 Pro on a similar processor in this test, and some additional graphics settings were even available on Asus. What accounts for this difference is unknown. Perhaps the problem lies in the software part of Xiaomi and it will probably be fixed over time. Moreover, nothing like this was noticed in World of Tanks. In general, in this game, all smartphones showed approximately the same result, it is most comfortable to play at medium graphics settings. Only Mi8 Lite pulls high settings without any problems. And in the game OddWorld New and Tasty, the situation is about the same: on Mi8 Lite, medium-high graphics settings are playable, while other devices cope with a maximum of medium.

Results for the second test:

Xiaomi Redmi Note 6 Pro - 2 points (even despite the problems of the smartphone in PUBG, otherwise it was at the level of Snapdragon 636)

To pass this test, we installed 15 applications on all devices:

Then, on each smartphone, we alternately launched these applications for 2 laps, marking the time with a stopwatch. The 1st circle makes it clear how fast the smartphone opens certain applications and how quickly it loads data, and the 2nd circle is needed in order to determine how well the system works with RAM. The smartphone that completes the fastest will receive the maximum score for this test.

As a result, speaking generally, we have 2 leaders and 2 outsiders, between which the difference is exactly one minute. Therefore, we ranked the scores for this test as follows:

Xiaomi Mi8 Lite was endowed with a relatively small 3350 mAh battery. Honor 8X got a slightly more capacious battery - 3750 mAh. Redmi Note 6 Pro left not far with its 4000 mAh. But Asus outdid everyone, it has a giant 5000 mAh battery. In order not to repeat, all the details of passing this test are described in a separate article . 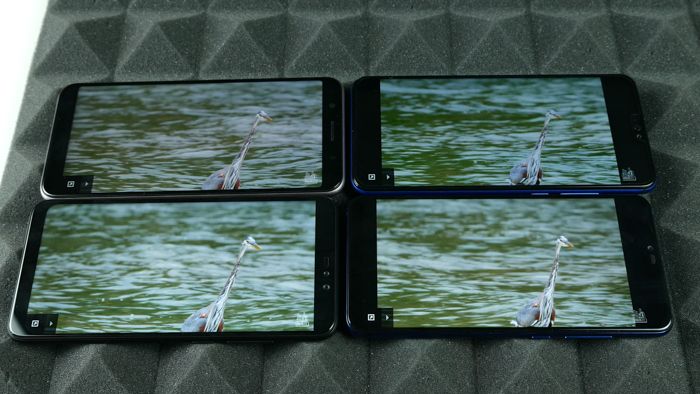 As expected, Asus lasted the longest, with a battery life of 8:41. Honor 8X showed a result that is almost 2 hours worse - 6:55. Xiaomi Redmi Note 6 Pro lasted almost an hour less, its result is 6:07. Well, the Xiaomi Mi 8 Lite smartphone closes this list, its time to complete discharge was only 5:27. Accordingly, we ranked the scores. On merit.

For this test, for each of the smartphones, we took 4 photos in different lighting conditions. All images were evaluated according to 3 criteria: color reproduction, detail, as well as exposure and contrast. For each of these points, the devices were scored from 1 to 4 (as always, the more the better). Then they were summed up and according to the results of the overall assessment, we chose the favorite and the outsider. 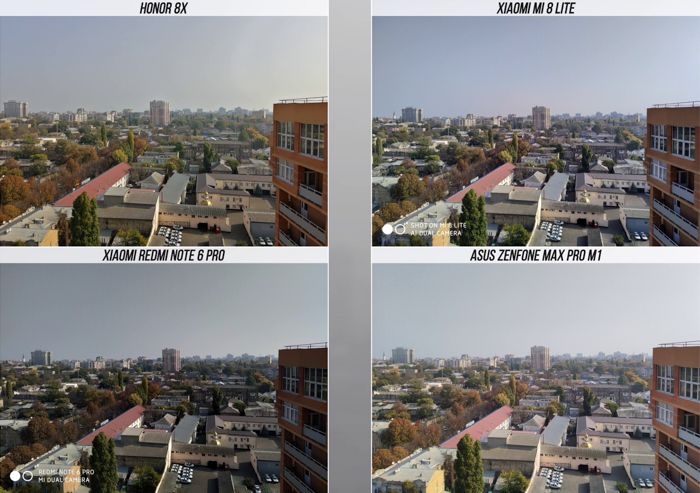 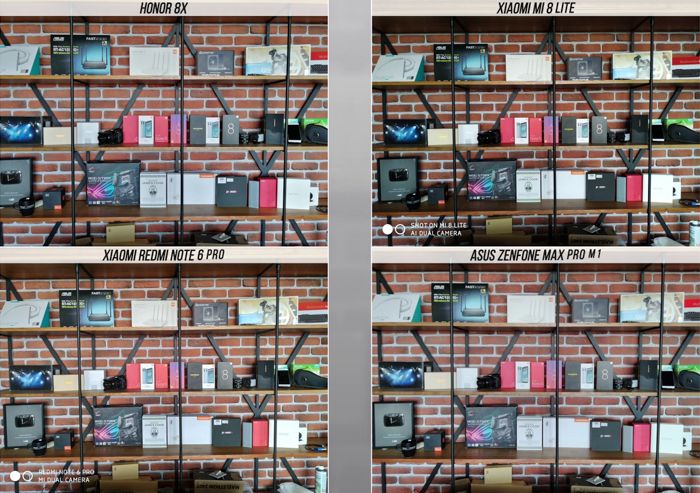 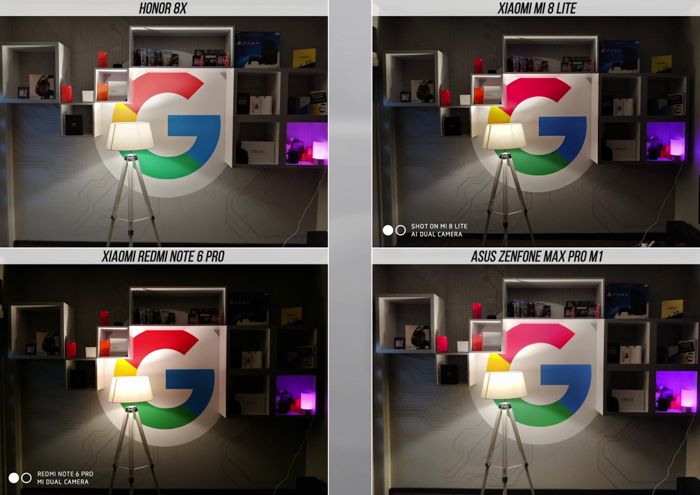 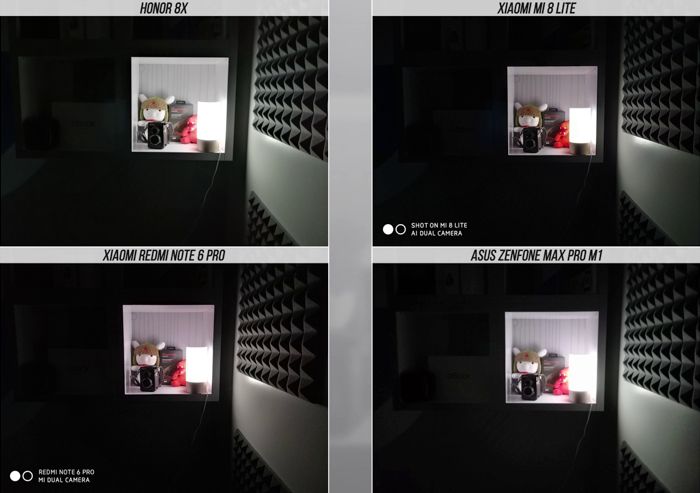 In terms of color reproduction, the Mi 8 Lite proved to be the best. In almost all test photos, its dual camera module of 12 and 5 megapixels with apertures of 1.9 and 2.0 showed the most accurate and realistic colors. And in terms of dynamic range, it also turned out to be the best, ahead of Honor 8X by only 1 point. In turn, the 8X shots with the 20MP main camera, 1.8 apertures and secondary depth sensor were the most detailed, and on par with the color reproduction of the Redmi Note 6 Pro, which came in third place in our photo test. It has cameras similar to Mi 8 Lite at 12 and 5 megapixels, but with apertures of 1.9 and 2.2 A, Asus closes the list, which is quite seriously behind its competitors in this comparison in all respects. Which is quite expected, given its far from the fastest cameras at 13 and 5 megapixels with apertures of 2.2 and 2.4. Only in the first photo, in bright daylight, he showed quite a decent result. And the scores for this test are as follows.

On each subject, we listened to several identical compositions at different volume levels. And in order not to beat around the bush, let's go directly to the results. Xiaomi Mi 8 Lite sounds the best, it has the loudest, deepest and clearest sound. In second place was Asus, with more detailed and louder sound than the Note 6 Pro. But the Honor 8X multimedia speaker is absolutely not suitable for listening to music, so we put it in last place.

points for this test. 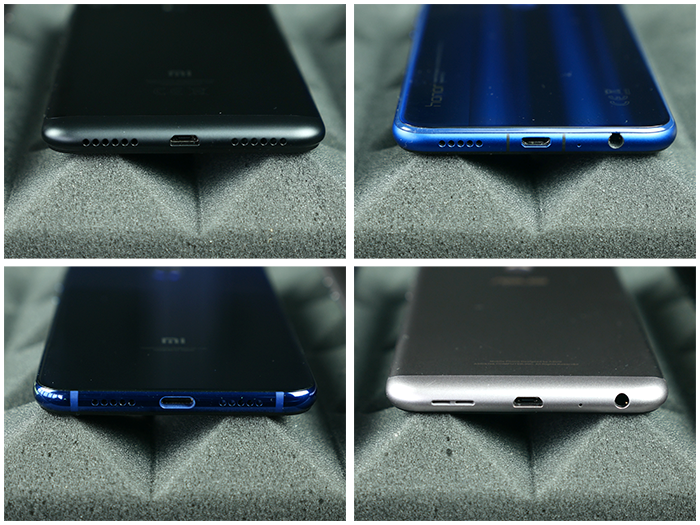 Based on the scores of the tests passed above, the final scores are as follows:

As expected, Xiaomi Mi8 Lite was in first place. Since it has the highest performance, cool camera, nice sound and excellent display. But at the same time, it is impossible not to note the frankly weak indicators of the autonomy of this smartphone.

And a few words about the individual advantages and disadvantages of the devices that we did not include in our comparison: Despite the fact that Mi8 Lite took first place, it has a big jamb with Wi-Fi antennas. With a certain grip of the smartphone, you can almost completely lose the signal. In addition, it does not have a standard audio jack. But at the same time, instead of the outdated micro-USB, there is a modern Type-C here. But Asus and Honor, although they cannot boast of a Type-C connector, have a nice bonus in the form of NFC. And only Redmi Note 6 Pro does not have any features and chips. In fact, this is still the same Note 5, only with a cutout in the screen and a slightly upgraded camera. A boring device that brought us nothing new.